LATE former President Robert Mugabe's widow Grace Mugabe is not entertaining any plans to abandon the country and seek asylum elsewhere, a family spokesperson has said.

Grace fell out with the now President Emmerson Mnangagwa in 2016 when she mounted a fierce campaign against a bid by the then State Vice President to position himself for takeover from her husband.

The controversial first lady went to the lengths of harassing Mnangagwa in front of Zanu PF crowds, often accusing him of a plot to overthrow her husband.

Her accusations placed Mnangagwa at a constant risk of being arrested for treason with dire consequences.

Things came to a head when Mnangagwa, with military assistance, muscled his way to the country's top job via a soft coup, causing panic and uncertainty within the former First Family.

Her G40 allies in former Ministers Jonathan Moyo, Saviour Kasukuwere, Patrick Zhuwao, among others, have since skipped the country amid claims Mnangagwa was out to revenge his harassment.

Circumstances, it would seem, could be changing in the absence of her once influential husband, seen as her shield from State harassment.

Asked if the Former First Lady was planning to go into exile, late former President's nephew and family spokesperson during the bereavement period, Leo Mugabe said Grace shall stay put.

"She will settle here. She is Zimbabwean, she has no reason to go anywhere. She will be at her house at Blue Roof," Mugabe told NewZimbabwe.com.

"I am sure she will start to do her normal work after the burial, that she has always been doing before at the farm and running the family business."

Mugabe's death has brought spotlight on Grace's future after speculation that the family and assets could be at risk.

"I know of a certain lady called Stop It (Grace) who owns 16 farms," Mnangagwa said.

Earlier reports have linked the former First Family to the disposal of some assets at its dairy farm.

Grace has also been acquiring assets outside the country, fuelling speculation this could be linked to her plans to settle abroad.

Mnangagwa has kept Grace guessing about her future. 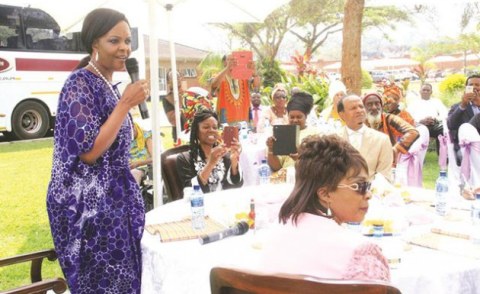