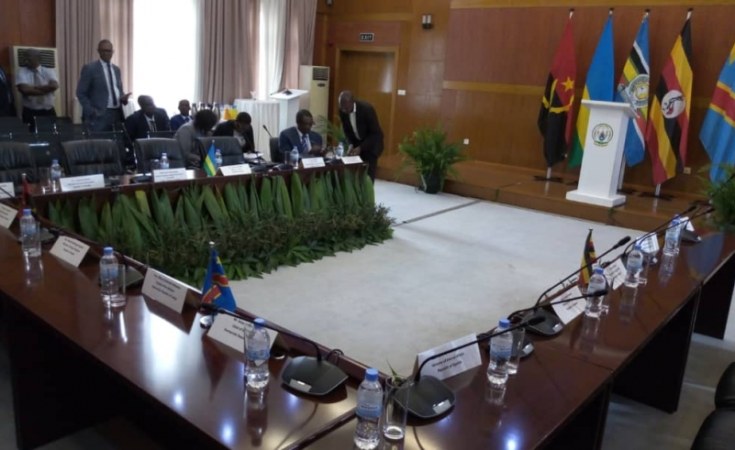 New Times
Rwanda and Ugandan officials meet in Kigali.
The Monitor (Kampala)
By The Eastafrican

Uganda has released 32 Rwandans ahead of crucial high-level talks with Rwanda officials next week, as both countries begin implementing a Memorandum of Understanding signed by their heads of state in Angola last month.

The release of the 32 Rwandans is seen as a sign of goodwill, although Rwanda is expected to continue to solicit for the release of other Rwandans it says are still incarcerated in Uganda.

Rwanda has in the past asked Uganda to release its citizens whom it says were illegally arrested, detained and tortured.

Uganda said the individuals were referred from its Chieftaincy of Military Intelligence (CMI) for deportation due to "illegal entry and illegal stay."

This is the second mass deportation in three months, after 20 other Rwandans were deported from Uganda in June.

Some of the deported individuals have filed lawsuits against Uganda at the East African Court of Justice.

The Monday meeting is part of the MoU that both President Paul Kagame and President Yoweri Museveni signed during the quadripartite summit in the Angolan capital Luanda, which called for the establishment of an ad hoc committee for the implementation of the agreement headed by the Ministries of Foreign Affairs.

Uganda's Minister for Foreign Affairs Sam Kuteesa will lead a delegation for the closed door meeting.

Media will be allowed to witness the opening ceremony only.

Uganda is expected to pursue the reopening of Rwandan borders for its goods, which continue to be heavily restricted and have been scarce in Rwandan markets for months since the tensions escalated in late February.

Under the MoU, both countries agreed to "resume as soon as possible the cross-border activities including the movement of persons and goods, for the development and improvement of the lives of their population."

To date, Rwandans are advised to be careful when they cross the border to Uganda.

During their meeting in Luanda, Presidents Kagame and Museveni reiterated that the MoU should be implemented fully "without picking and choosing," noting that disputes in its interpretation shall be settled through dialogue between the parties or through the help of facilitation.

But tensions picked up again almost immediately after the meeting in Angola, with Rwanda blocking several Ugandan online media sites in retaliation after Uganda had done the same.

Officials from both countries told The EastAfrican that they had agreed to solve this impasse by unblocking sites, although it has not come to pass to date.

Relations May Sweeten as Uganda Envoy Meets Rwandan President
Tagged:
Copyright © 2019 The Monitor. All rights reserved. Distributed by AllAfrica Global Media (allAfrica.com). To contact the copyright holder directly for corrections — or for permission to republish or make other authorized use of this material, click here.