South Africa: Army 'Becoming Tourists On the Cape Flats', Say Some Cpfs As Deployment Is Extended 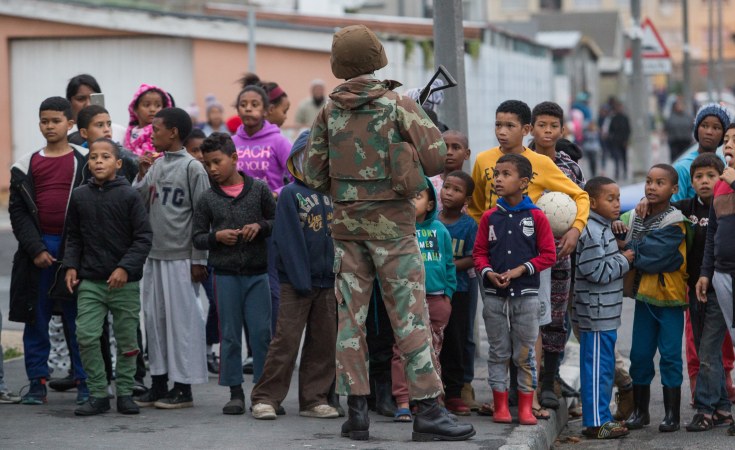 Community Policing Forums (CPFs) have suggested several ways in which the South African National Defence Force (SANDF) can best take advantage of their deployment to the Cape Flats, after their stay was extended for six more months.

For a start, it would be helpful if they were more visible in parts of Mitchells Plain, said Lentegeur CPF chairperson Byron de Villiers.

"I feel that they have done nothing in our area to be honest. We haven't experienced the operational side of Operation Lockdown," he said.

De Villiers, who had been calling for the deployment for a while, said they were in the middle of a gang war and there had been no sign of the army, despite shootings since Sunday night.

He wanted the army to "bring stability by themselves, not under the guidance of the police", as he felt the police were using them for tasks such as helping to close down shebeens.

"They are becoming tourists on the Cape Flats," he said.

"They are standing around shopping malls and on the roads, when they could have been in gang-infested areas breaking down doors and getting rid of guns."

Authorities should ask communities where their problem areas and gang leaders were so they could be targeted, he said.

"If they [the SANDF] are going to be extended for what they are currently doing, then by all means they can pack up and go home. But if they are going to be active in communities, then they should stay."

On Monday, the Presidency announced that Ramaphosa had extended the SANDF's stay until March 31, 2020. The original two-month deployment was meant to end on Monday.

'We need the situation to be contained'

He would have welcomed the latest news after recommending that the deployment be extended for nine months.

"We have areas that need special attention in terms of stabilising."

He said many residents were suggesting that the army be used to "lock down" trouble areas completely to root out criminals.

"What we need in that area is for the guns to be taken out and, in order for the police to work there, we need army to support them," he said.

"Recently there have been a few mob attacks, where the community attacks suspects and the police find it difficult to do their work."

Bam believed it was important for "some independent boots to be on the ground", referring to the army.

He said some claimed that police in their precinct were corrupt and in the pocket of gangs, which was difficult to prove.

"We need the situation to be contained."

'Army deployment has yet to make a dent'

Police Minister Bheki Cele in August said that more than 1 000 arrests had been made as part of Operation Lockdown.

The community safety department said provincial forensic services data showed that 682 murders had been recorded in the Western Cape between July 15 and September 8, making an average rate of 12.4 murders a day.

The statistics were for the province as a whole.

"Using this marker alone, it is clear that the army deployment has yet to make a dent in the enormous crime problem this province faces," said Cayla Murray, spokesperson for MEC Albert Fritz.

"It is however unclear whether police management, who are running Operation Lockdown, are using any sort of measurable targets in the current deployment."

Murray said they did not believe the army's maximum potential was being exploited.

"The SAPS is massively under-resourced in this province, and the SANDF provides additional boots on the ground and resources, provided they are properly used."