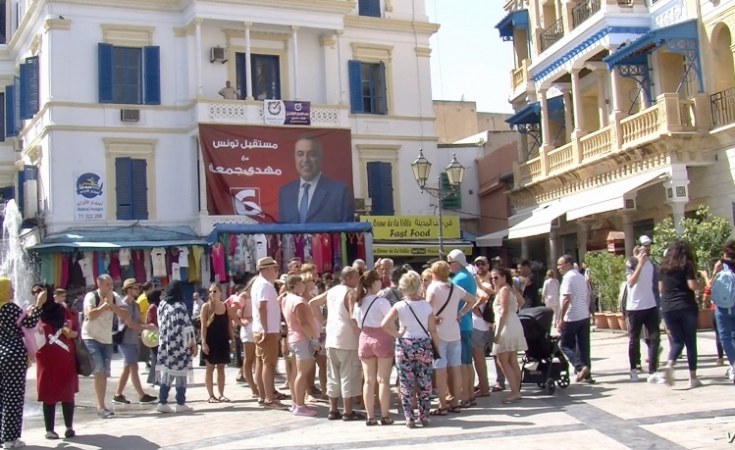 L. Bryant/VOA
Tourists at the medina in Tunis are flanked by campaign posters on September 13, 2019.
Deutsche Welle (Bonn)

An imprisoned populist who owns a TV channel and a reserved law professor are the two leading candidates. The vote has been widely seen as a stress test for Tunisia's fledgling democracy.

Tunisia's elections were headed to a runoff on Tuesday between a jailed media mogul and a socially conservative academic, according to final results from the electoral commission. Both have branded themselves political outsiders in a contest that included 26 candidates.

"I am first in the first round and if I am elected president I will apply my program," he told French news agency AFP after claiming the victory.

Saied has promised to overhaul the constitution and to decentralize power "so that the will of the people penetrates into central government and puts an end to corruption."

He has also defended repressive policies like the criminalization of homosexuality and capital punishment.

His rival, media mogul Nabil Karoui, received 15.6% of the votes.

Karoui has been in jail since August 23 on suspicion of money laundering -- but has received permission to let his wife and leaders of his Heart of Tunisia party campaign in his stead.

Karoui has been compared to Italy's Silvio Berlusconi, largely because he owns his own TV channel, which he has used to publicize his presidential bid. He has also been criticized for exploiting some of the country's poorest citizens in his high-profile charity campaigns.

The candidates' success was seen as a repudiation of the moderate parties that have ruled Tunisia since the 2011 Arab Spring.

The Arab Spring began with the Tunisian Revolution against strongman Zine El Abidine Ben Ali, and the country became the only success story from the movement with its peaceful transition to democracy.

According to the NGO Freedom House, Tunisia is considered the only fully democratic sovereign state in the Arab world.

The runoff vote is expected to be held in early October.