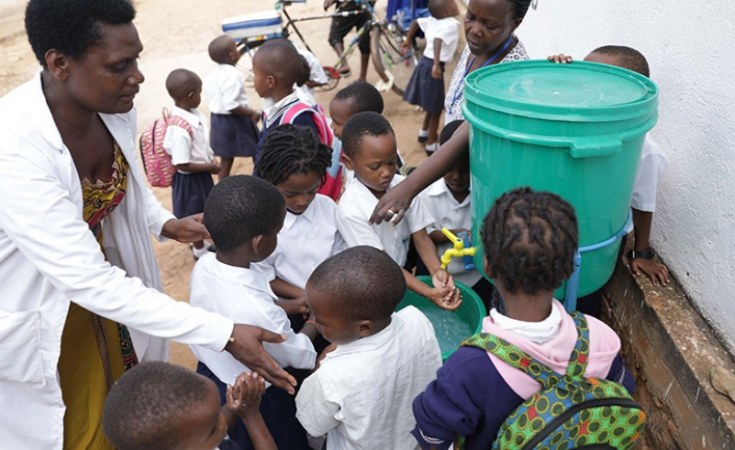 The Minister for Health, Dr Diane Gashumba, and her Congolese counterpart Dr Eteni Longondo, have commended the progress that the two countries have made in implementing a joint roadmap for cross-border efforts meant to combat the spread of Ebola Virus Disease (EVD) epidemic.

The two officials met on Monday evening in Rubavu District on the Rwandan side of the border to assess the progress of a joint mechanism for prevention and control the Ebola Virus that the two countries discussed and agreed last month.

A strategy to strengthen cooperation, particularly in the field of public health, is part of the roadmap that the two countries signed.

According to officials from the two countries, a lot has been done to curb the spread of Ebola that has recently been recorded in the Congolese city of Goma which is close to the Rwandan border, prompting rapid response teams to swing into action to prevent further transmission.

As part of the roadmap implementation, joint cross-border Ebola prevention and response action plan and technical meetings have been held in Goma and Bukavu (in DR Congo) to strengthen prevention and surveillance measures in the cross-border communities.

Officials from the two countries have also met in Congo Brazzaville for an advocacy meeting attended by the Director-General of the World Health Organisation (WHO) Dr Tedros Adhanom Ghebreyesus, and the WHO African Regional Director, Dr Matshidiso Moeti to discuss the implementation of the cross-border plan.

Dr Longondo reiterated his country's commitment toward eliminating Ebola as well as curbing the epidemic spread across its neighbours.

"The Democratic Republic of the Congo is very concerned with this Ebola epidemic and remains committed to eliminating it and ensure most of the epidemic diseases are controlled," he noted.

Longondo went on to say that besides Ebola: "We should capitalise on the partnership between our two countries in order to make a joint strategy to fight against any other potential epidemics".

Dr Gashumba said Rwanda was grateful to DR Congo for efforts the later invested in preventing the epidemic from spreading inside and outside the country as well as effectively managing confirmed cases.

"I commend efforts made by the DRC Government in controlling Ebola in terms of surveillance and particularly the fact that cases confirmed in Goma were successfully managed and the very good progress made in the implementation of the roadmap signed between our two countries," She said

Minister Gashumba said she was satisfied with the outcome of the meeting and reaffirmed her commitment to collaborate with her counterpart in the fight against Ebola Virus.

WHO in July called the Ebola epidemic in DR Congo a Public Health Emergency of International Concern (PHEC), urging the international community to step up its support.

PHEC is a formal declaration by the UN agency in charge of world health matters of an extraordinary event, which is determined to constitute a public health risk to other states through the international spread of disease.

Rwanda has embarked on robust community awareness and mobilization, vaccination of frontline workers, creation of EVD treatment centres, and stepping up surveillance.