Zimbabwe: Doctors On Strike Over Alleged Abduction of Colleague 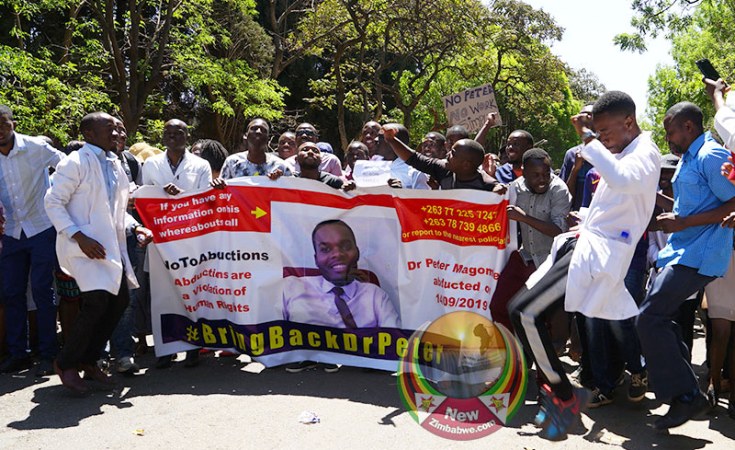 Zimbabwean doctors from private and public hospitals went on strike on Monday and demonstrated in the capital against the alleged abduction of Zimbabwe Hospitals Doctors Association (ZHDA) acting president Peter Magombeyi.

Magombeyi was allegedly abducted by unknown people on Saturday evening, and his whereabouts have not been known since then. The doctors marched from the country's biggest referral hospital, Parirenyatwa Group of Hospitals in Harare, through the streets of Harare before they were stopped by riot police from reaching President Emmerson Mnangagwa's government offices in the central business district.

A few selected representatives were allowed to proceed to Mnangagwa's offices where they handed over a petition demanding the immediate release of Magombeyi. The doctors also planned to hand over the same petition to the ministers of health and child care, home affairs, justice and legal affairs, and to the Health Services Board.

Addressing reporters and the doctors after handing over the petition, ZHDA acting treasurer-general Tapiwa Mungofa urged authorities to address the issue as a matter of urgency, saying the lives of both people and doctors were at risk.

"We are calling upon our security forces to work extra hard in trying to find our colleagues so that our senior colleagues, senior doctors and junior doctors can be able to go back to work," he said.

Mungofa said the doctors will not return to work until Magombeyi is found. He also urged the government to address the issue of their salaries.

The doctors want their salaries, which were previously pegged to the U.S. dollar, to be adjusted to the prevailing inter-bank rate. Zimbabwean doctors have been on strike since early this month, demanding a review of their salaries and improvement in working conditions.

Previous Story
Doctors Strike On - Claim They Are Still Incapacitated to Report for Work
Next Story
A History of Abductions, Assassinations

A History of Abductions, Assassinations

Panic Grips Market As Zimbabwe Dollar Plunges
Tagged:
Copyright © 2019 Ghanaian Times. All rights reserved. Distributed by AllAfrica Global Media (allAfrica.com). To contact the copyright holder directly for corrections — or for permission to republish or make other authorized use of this material, click here.

War of Words Over Massacre in Ethiopia's Holy City
Conflict