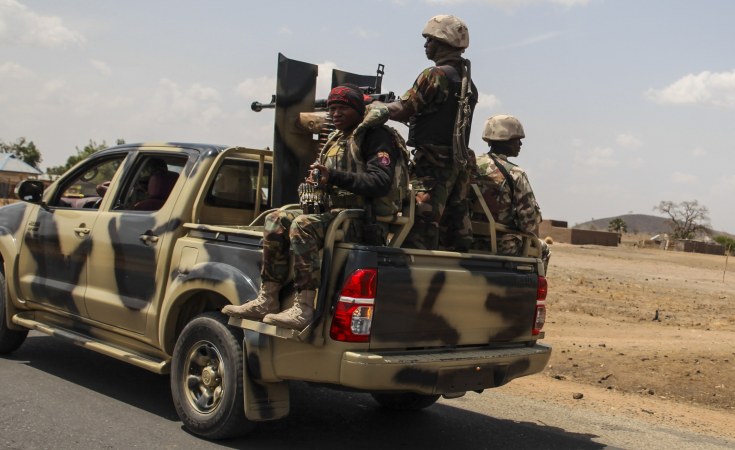 It said there was mass exodus of insurgents out of Lake Chad Tumbus to North and Central Africa.

A statement by army spokesman, Col. Sagir Musa, said credible intelligence reports indicated that erstwhile settlements of the terrorist organisations on the fringes of Lake Chad had become empty as a result of sustained pounding of insurgent locations by the combined forces.

It said: "The Nigerian Army wishes to inform the public that due to the combined onslaught on the identified hideouts of elements of the criminal elements of bandits and erstwhile Boko Haram/ISWAP fighters by our troops and the MNJTF, at the fringes of Lake Chad region, there is observed massive exodus of the criminals out of Lake Chad Tumbus to North and Central Africa sub-regions.

"There are credible reports from very reliable sources indicating massive movements of the criminal groups out of the area towards Sudan and Central African Republic as a result of successful artillery and aerial bombardments of their settlements and as the heat of the onslaught is becoming unbearable."

It added: "Mass movement for their lives was necessitated following the sustained air and artillery bombardments by the Nigerian Armed Forces and Coalition forces of the MNJTF, which killed uncountable erstwhile Boko Haram and ISWAP fighters and destroyed their weapons and equipment.

"The various national troops and the MNJTF are maintaining aggressive patrols and blocking positions against infiltration by the escaping criminals. It is important to note that most of the Tumbus are located along the quadrangular borders of Cameroon, Chad, Niger Republic and Nigeria".

The Army added that it had resumed shelling and bombardment of the fleeing terrorists.

"To further annihilate the fleeing terrorists, efforts are ongoing for continued shelling, bombardment and pursuits. Similarly, the countries in these sub-regions have also had been contacted through the MNJTF Headquarters," it said.

Maiduguri Not under Threat, Says Military

The Nigerian Army also said there was no planned attack by insurgents on Maiduguri.

The army in another statement urged Maiduguri residents to disregard rumours that insurgents planned attacks on strategic facilities in the city.

"Information on social media revealed that some mischievous elements are insinuating and peddling rumours of 'terrorists' plan to execute deadly attacks on some selected populated areas and key facilities in Maiduguri town and neighbouring areas in order to cause panic and inflict casualty on innocent Nigerians.

"Headquarters Theatre Command, Operation Lafiya Dole, assures the public that necessary measures have been put in place to checkmate the purported evil plans of the criminals," it said.

'Special Hunters' Join Military Campaign Against Boko Haram
Tagged:
Copyright © 2019 This Day. All rights reserved. Distributed by AllAfrica Global Media (allAfrica.com). To contact the copyright holder directly for corrections — or for permission to republish or make other authorized use of this material, click here.