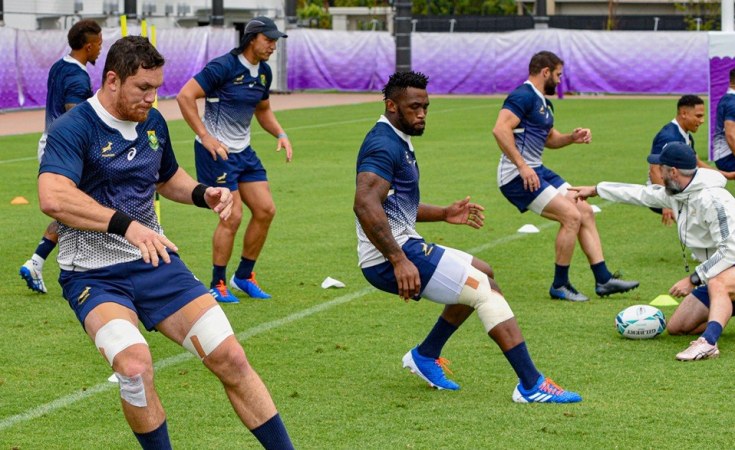 Cape Town — The Springboks went down to the All Blacks after a hard-fought Rugby World Cup encounter in Yokohama on Saturday.

The South Africans fought back well in the second period but the Kiwis kept their composure to close the game out in the latter stages.

The Boks took an early lead via a Handre Pollard penalty and bossed the early exchanges. However, momentum appeared to swing when Pollard missed an easy penalty attempt for a 6-0 South African lead.Soon afterwards, the All Blacks capitalised on a weak pass from scrumhalf Faf de Klerk to lay siege on the Bok tryline. They couldn't get through but won a penalty, with flyhalf Richie Mo'unga levelling matters after 22 minutes. The All Blacks showed renewed vigour and troubled the Boks with their expansive game, scoring two quickfire tries via winger George Bridge and lock Scott Barrett.Suddenly, the scoreline read 17-3 in New Zealand's favour and it looked a long way back for South Africa.But the Springboks slowly regained their composure and fought back gallantly in the second half.In the 47th minute, flank Pieter-Steh du Toit barged over next to the posts after a concerted period of attack to reduce the deficit to seven points.A long-range drop goal from Pollard made the score 17-13 midway through the second half but New Zealand showed class and composure in the manner they closed the game out.

Two late penalties from Mo'unga and Beauden Barrett took the score to 23-13 which settled matters.

The Boks were heavily penalised by French referee Jerome Garces and will no doubt be questioning a few of his calls, especially at the breakdown and scrum time.

Winger Cheslin Kolbe was a standout for South Africa. He was sound under the high ball, solid in defence and troubled New Zealand with several sniping breaks.

He limped off late in the game with a leg injury which will be of grave concern for coach Rassie Erasmus.

The Boks also lost replacement prop Trevor Nyakane late in the game with what looked like a serious knee injury.

South Africa's next match is against Namibia in Toyota next Saturday (September 28), while New Zealand are next in action against Canada in Oita on Wednesday, October 2.