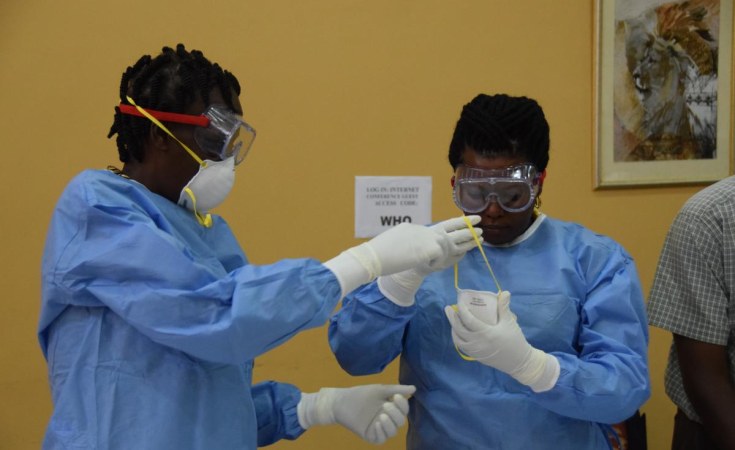 The World Health Organization has said it learned the east African country has one confirmed and two suspected cases of Ebola. The latest outbreak has already spread from the Democratic Republic of Congo to Uganda.

Tanzania is refusing to provide detailed information on suspected Ebola cases, the World Health Organization said on Sunday, accusing the east African country of impairing efforts to curb the spread of the deadly virus.

Despite Tanzanian authorities reporting no Ebola in the country on September 14, the WHO said it had learned four days earlier of a suspected case in Dar es Salaam, Tanzania's most populous city.

The Geneva-based WHO said the affected woman later tested positive for the disease and had died.

Although "identified contacts of the deceased were unofficially reported to be quarantined," the WHO said in a statement, the Tanzanian government did not address the death of the woman directly and did not provide any further information.

Two other suspected cases were reported privately. One tested negative for the virus, and there was no information on the other one.

"Despite several requests, WHO did not receive further details of any of these cases from Tanzanian authorities," the statement continued, adding that the lack of information "represents a challenge" for health authorities in the region.

Victims and contacts must be isolated

Ebola can only be curbed if contacts of any potentially infected person are quarantined and the public warned to step up precautions like handwashing.

East and Central Africa have been on high alert for possible spill-overs of Ebola from the Democratic Republic of Congo where a year-long outbreak has killed more than 2,000 people.

Uganda, which neighbors Congo, has already recorded several cases after sick patients crossed the border. A quick government response there prevented the disease from spreading.

A leaked internal WHO document revealed that the 34-year-old Tanzanian victim had recently visited several parts of the country, and traveled to Uganda.

She had shown signs of the virus including headache, fever, rash, bloody diarrhea in early August and eventually died on September 8.

The current Ebola outbreak is the second-worst in history after more than 11,000 people died in Guinea, Sierra Leone and Liberia between 2014 and 2016.

But containment efforts have been hindered from the start by conflict in eastern DRC, as well as attacks on medical teams due to resistance within some communities to preventative measures, care facilities and safe burials.

Tanzania is heavily reliant on tourism, and an outbreak of Ebola would likely lead to a dip in visitor numbers.

Doctors Without Borders Calls for Inquiry Into Ebola Vaccinations
Tagged:
Copyright © 2019 Deutsche Welle. All rights reserved. Distributed by AllAfrica Global Media (allAfrica.com). To contact the copyright holder directly for corrections — or for permission to republish or make other authorized use of this material, click here.