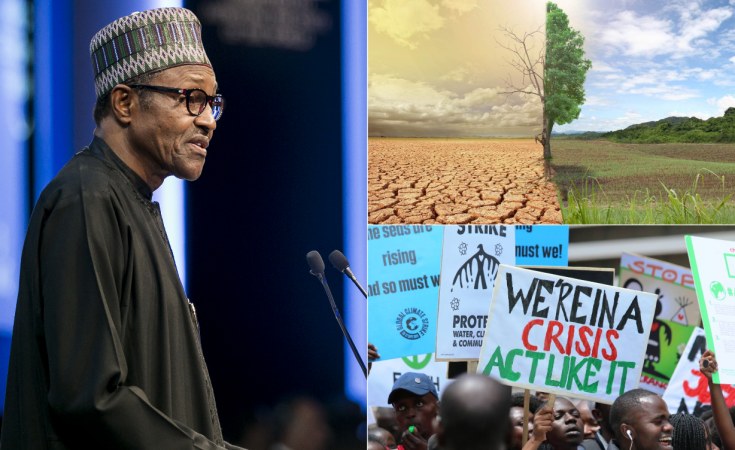 Abuja — President Muhammadu Buhari yesterday echoed the Secretary-General of the United Nations (UN), Antonio Gutteres, that the world is heading towards a climate calamity.

Speaking at the UN Climate Action Summit at the ongoing 74th UN General Assembly (UNGA) in New York, with the theme, 'A Race We Can Win, A Race We Must Win,' Buhari who said he shared the sentiment earlier expressed by Gutteres, described climate change as a global phenomenon.

A copy of the president's speech, which he delivered at the occasion, was sent to THISDAY by e-mail.

He said: "I share the sentiment expressed by the Secretary General that the world is on the verge of climate catastrophe. Undeniably, climate change is a human-induced phenomenon."

Reiterating Nigeria's commitment to the Paris Agreement, Buhari acquainted the summit with Nigeria's plans to combat climate change, saying that in the energy sector for instance, Nigeria is set to achieve 30 per cent energy efficiency and renewable energy by 2030.

"In the energy sector, Nigeria is presently diversifying its energy sources from dependence on gas-powered system to hydro, solar, wind, biomass and nuclear sources. Specifically, Nigeria is progressively working to realise 30 per cent energy efficiency and renewable energy mix by 2030. This is envisaged to lead to 179 million tonnes of carbon dioxide reduction per annum by 2030."

He expressed Nigeria's plan towards developing what he described as "a more robust sectoral action plan," to enlarge the frontiers of the country's sovereign green bonds.

He also spoke on the country's plan in the water sector, including the federal government's plans on irrigation, water supply, solid and liquid waste management.

The president also told the summit on the plan of the federal government to develop a shelter belt across 11 states covering 1,500 kilometres and beyond as well as the implementation of hydrocarbon pollution remediation programme in Ogoniland.

"In the water sector, Nigeria will issue a Green Bond for irrigation and construct multi-purpose dams for power, irrigation and water supply. We will strengthen solid and liquid waste management systems to attract more private sector investors.

"We will take concrete steps to harness climate innovative ideas by including youths in decision making processes as part of our over-all climate governance architecture. We will mobilise Nigerian youths towards planting 25 million trees to enhance Nigeria's carbon sink...

"In addition, our administration intends to develop a shelter belt across 11 states of the federation spanning a distance of 1,500 km and 15km across through the Great Green Wall initiative. Furthermore, the federal government has commenced the implementation of the Hydrocarbon Pollution Remediation Programme in Ogoniland, to recover the carbon sink potential of the mangrove ecosystem of the one thousand square kilometers (1,000 KM2) polluted site in the affected area," he said.

Buhari added that the country has introduced what he termed climate smart agricultural practices to serve as a platform for unlocking 74 million tonnes of carbon dioxide per annum through the use of technologies, advocacy and best practices.

He also spoke passionately about the state of the Lake Chad and called for effective partnership of the international community in the effort to recharge the lake and restore the livelihood of no fewer than 40 million people whom he said depended on the lake for survival.

"As you are aware, the Lake Chad Basin, which used to be a region of productivity, food security and wealth for an estimated 40 million citizens living around the Chad Basin, has shrunk significantly from its original size due to climate change.

"We will continue to lead in efforts to have solid partnerships for the ecological restoration and recharge of the lake. We are confident that this would improve the living conditions of the diverse nationals living in the area, promote inter-state cooperation, strengthen community resilience, as well as assist in addressing the environmental and security crisis that threaten the region, its resources and inhabitants.

Climate Change - Africa, World Still Have 'Long Way to Go'
Tagged:
Copyright © 2019 This Day. All rights reserved. Distributed by AllAfrica Global Media (allAfrica.com). To contact the copyright holder directly for corrections — or for permission to republish or make other authorized use of this material, click here.