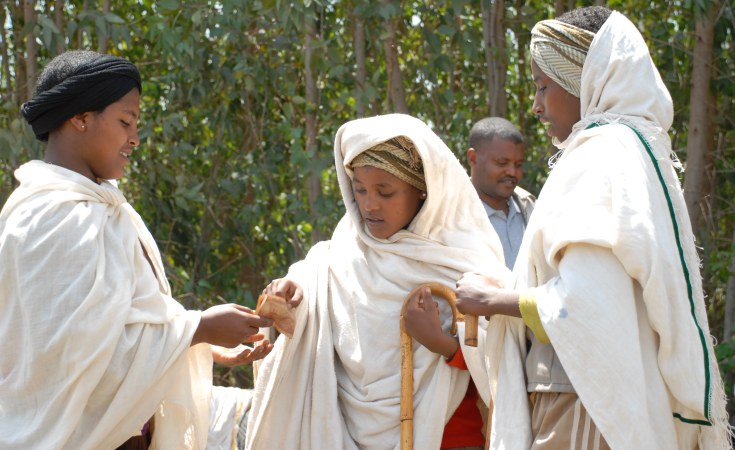 Ashenafi Tibebe/Girls Not Brides
Role playing by participants in the Berhane Hewan project in Amhara, Ethiopia. The girls are highlighting how decisions, such as whom and when they will marry, are made about their lives without their consent (file photo).
Tanzania Daily News (Dar es Salaam)
By Daily News Reporter in Dodoma

CHARLES Mkonjela (34), a farmer in Mtumba Village in Dodoma, has been sentenced to 30 years' imprisonment for marrying a primary school pupil in 2016, while her father, who had been paid dowry for the child bride and two accomplices were sentenced to five years in prison or payment of a 5m/- fine each for the crime.

The trio was found guilty of committing three crimes on separate days in 2017 - organizing the wedding of a 14 year old pupil, raping and impregnating her on unknown dates.

In his defence, Mkonjela said he married the girl in accordance with traditional wedding regulations, and paying a 450,000/- dowry which was handed over to her father.

He further remarked that in spite of his wife being 16 years of age when the wedding ceremony was held, she was now a mother to one child.

The girl's father, Daniel Petro, had told the court that when the wedding ceremony was held, her daughter had dropped out of school.

Nigeria's Ese Oruru Highlights Plight of Child Marriage Survivors
Tagged:
Copyright © 2019 Tanzania Daily News. All rights reserved. Distributed by AllAfrica Global Media (allAfrica.com). To contact the copyright holder directly for corrections — or for permission to republish or make other authorized use of this material, click here.