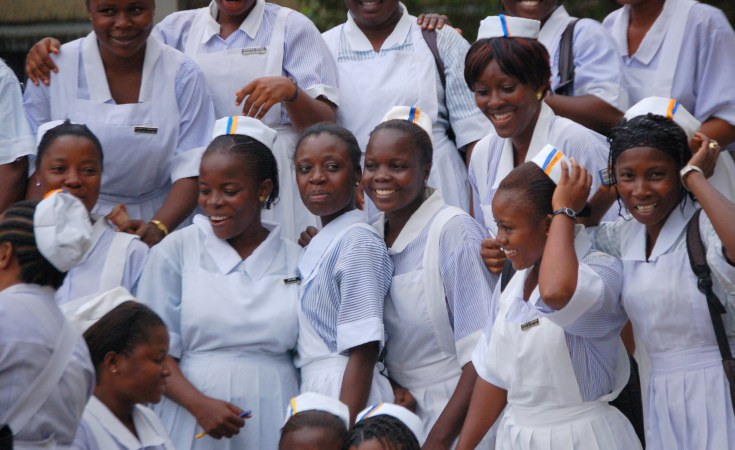 It was the first of its kind in Liberia since the end of the civil crisis.

On Monday, September 23, pregnant women and mothers with babies took to the streets to express their dissatisfaction. The large crowd of women were singing and chanting, "We want treatment. We will not leave until we are given the necessary care."

But medical doctors and health workers at the Du-port Road Health Center were not attending to their critical conditions. The health workers in Paynesville City and elsewhere in the country were tired of complaining about the government's failure to pay their salaries, and they had stopped working.

Traffic was blocked for several hours as a result of the protest action.

Ruth Harris, one of the protesters, told the Daily Observer that early Monday morning, when she visited the Du-port Road health facility with her young baby, nurses at the facility refused to cater to them on grounds that the government "is yet to settle" health professionals' salaries.

"They complained of not being paid for several months, a reason for which they would deny us medical attention," Harris said.

She stated that the action of the nurses prompted her to join the other women to stage the protest, in order to claim the attention of the government.

Ruth also revealed that while at the clinic, another woman, who was experiencing "serious labor pain", arrived. She was not attended to.

"While she was standing outside as a result of being denied treatment, even though she was experiencing pain, her water burst," Ruth said.

The chairperson of the National Council of Chiefs and Elders, Zanzan Karwor, arrived to calm the situation. After a discussion with health authorities, Chief Karwor gave the Daily Observer a brief, one-on-one interview.

Speaking in simple Liberian English, Chief Karwor promised to reach authorities of the relevant government agencies (ministries of Finance & Health) for them "to see reason" in addressing the plight of the health workers -- and the pregnant mothers.

He described the situation as "very grave" and said that seeing pregnant women and mothers in the streets did not sit well with him. Neither was it a good sign for the country.

"Protests carried out by our citizens is not pleasant for our young democracy," he said.

Meanwhile, authorities at the Health Facility were not willing to comment on the issue when contacted.

In a related development, reports from Bong County says health workers there have joined their colleagues across the country to institute an indefinite strike action, demanding improved salaries, particularly given the much publicized "harmonization," which has caused delays in payment of salaries, and want better working conditions.

When the Daily Observer visited the two leading hospitals in the county on Monday, September 23, 2019, it was observed that the hospitals were virtually empty with no nurses present, but a few doctors were seen lingering in the corridors in a state of perplexity.

At the C. B. Dunbar Hospital, it was observed that there were only two assigned medical doctors catering to an influx of patients, mainly to those with "life threatening conditions."

This newspaper gathered that pregnant women, children and child bearing mothers, who were in the ward, were left in their beds, without anyone to attend to them.

The DailyObserver also learned of family members of some of the patients transferring their sick relatives to private health facilities.

One of the critical patients being transferred from the C. B. Dunbar Maternity Hospital to an unnamed private facility.

At Phebe Hospital, it was also observed that some of the more vulnerable patients were by midday yesterday doing everything by themselves, because there were reports that the nurses have abandoned them due to the strike action.

"We are taking a stance today. Patient care is at the core of our job, but we come here every day with a heart to do the best we can, and the government is not recognizing us," a middle-aged health worker said.

"We are here every day to ensure that we save lives, therefore, the government should ensure that we are properly taken care of," another health worker said.

Porters, laboratory aides, chefs and surgical instrument technicians, have joined the strike as part of a dispute in which the health workers say the unwanted deduction of their salaries under the so-called harmonization scheme has disadvantaged them of their entitlements such as allowances and other incentives.

Investigation conducted by the Daily Observer established that more than 500 surgical and scope procedures appointments for outpatients at both hospitals -- C. B. Dunbar Maternity and Phebe -- were cancelled yesterday because of the strike.

Madam Morris admitted that difficulties had arisen since the strike began in maintaining "essential daily care" for inpatients such as hydration, transferring and cleaning of patients.

She said the situation was getting worse by the hour, especially in other parts of the county where community residents depend heavily on public health facilities.

Meanwhile, nurses in the county have resolved to continue their strike action until government saw reason to address their concerns.

The Government of Liberia's late Monday joint press conference, held by the ministries of Health and of Finance and Development Planning, failed to address two major concerns the National Health Workers Association of Liberia (NAHWAL) raised about the shortage of drugs and electricity supply at government runs health facilities.

But Finance Minister Samuel Tweah at an emergency press conference held at the Ministry of Information, said the salary payments for both July and August 2019 have been processed, and the checks are being transferred to various commercial banks for direct deposit into health workers accounts.

Tweah's short statement, void of taking reporters' questions, came after having kept the reporters waiting for nearly three hours beyond the scheduled 5:00 p.m. time, when the press conference was supposed to begin.

He said the the government has done adjustments and corrections in the personnel listing of the Ministry of Health to reflect the "proper positions" and pay grades of health workers under the ongoing harmonization process.

"The government wishes to advise and encourage all health workers to return to work as it remains engaging with the leadership of NAHWAL," Minister Tweah said.

He added: "The government wishes to assure the general public that it remains committed to do all within its power to ensure the regularization of payment to civil servants expeditiously." 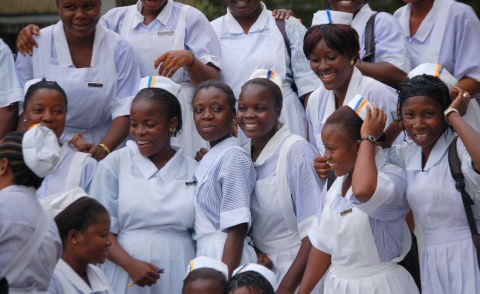 Liberia Patients Suffer as Health Workers go on Strike
Tagged:
Copyright © 2019 Liberian Observer. All rights reserved. Distributed by AllAfrica Global Media (allAfrica.com). To contact the copyright holder directly for corrections — or for permission to republish or make other authorized use of this material, click here.