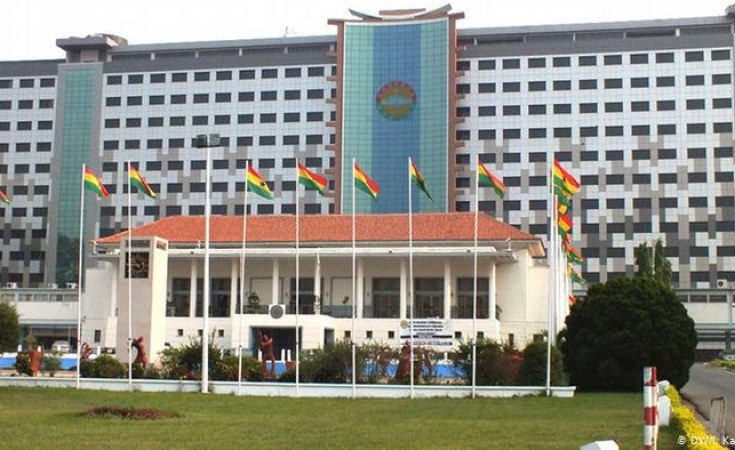 Photo: I. Kaledzi/Deutsche Welle
An outside view of parliament in Accra, Ghana.
Deutsche Welle (Bonn)
By Isaac Kaledzi, Ineke Mules

Ghanaian authorities say they have detained three suspects over an alleged plot to destabilize the country. The news came as a surprise to security analysts, considering Ghana's reputation as a stable democracy.

Security forces in Ghana say they have arrested at least three people over alleged plans to target the presidency.

"The joint operation was to neutralize an elaborate plot targeted at the presidency, and with the ultimate aim of destabilizing the country," information minister Kojo Oppong Nkrumah said in a statement on Monday.

The three suspects were detained on Friday after security agencies monitored their activities for 15 months. One of the suspects is a medical doctor at Citadel Hospital, which authorities say he also used as a base to manufacture and store weapons. The men were also allegedly in contact with some soldiers and an officer, who were also arrested in connection with the alleged plot.

Nkrumah went on to stress that "state security agencies remain vigilant, and will work to safeguard national security and public safety."

Earlier claims of an attempted coup drew surprised reactions from both Ghanaians and international observers. For nearly three decades, Ghana has long been viewed as a stable democracy in a region characterized by insecurity. It experienced five coups during the 1960s and 1970s, before military leader Jerry Rawlings overthrew Hilla Limann in 1981, ushering in Ghana's Fourth Republic. Since 1992, there have been no reports of attempted coups.

Security analysts were quick to downplay authorities' claims that the government was under any serious threat, saying the group did not have enough members and weapons or the ability to move.

"I don't think these people have the capacity to do that, even if they want to," analyst Prosper Nii Nortey Addo told DW. "We have a very professional military. I do not rule out the possibility, but I think people know the consequences."

Political analyst Ibrahim Alhassan is worried that the government's poor communication surrounding the incident may have negative consequences for the country's political landscape, as well as Ghana's international image.

"I'm quite curious as to how the linkage has been made between this weapons manufacturing syndicate... and the intention of overthrowing the government or creating instability in Ghana," he told DW. "We can only reassure the community that we are still the beacon of democracy, peace and stability in a troubled sub-region on the African continent."

The West African nation is due to go to the polls next year, where former president John Mahama will challenge incumbent Nana Akufo-Addo.

On the streets of Accra, Ghanaians were mostly unconcerned about reports of the plot.

"I think we are safe and the security agencies are putting in measures to make sure that we don't see these [coups] again," local Kojo Anim told DW.

"I don't understand why Ghanaians would decide to have a coup," said Jessica Mempasem. "It is not a nice thing."

Others were critical of the government's knee-jerk response to the discovery of the weapons cache.

"The government came [out with the story] too early because you really need to do [more] investigations before even coming out with it," said Nicholas Martey. "But [when it comes to] the safeness of the country, everything is ok." 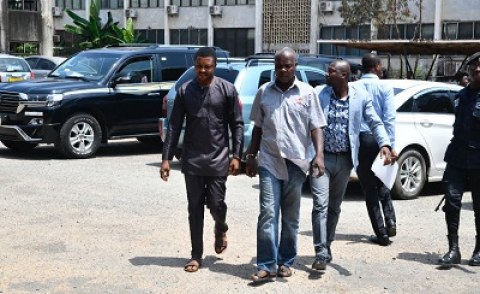 Three Suspected Ghanaian Coup Plotters Appear in Court
Tagged:
Copyright © 2019 Deutsche Welle. All rights reserved. Distributed by AllAfrica Global Media (allAfrica.com). To contact the copyright holder directly for corrections — or for permission to republish or make other authorized use of this material, click here.