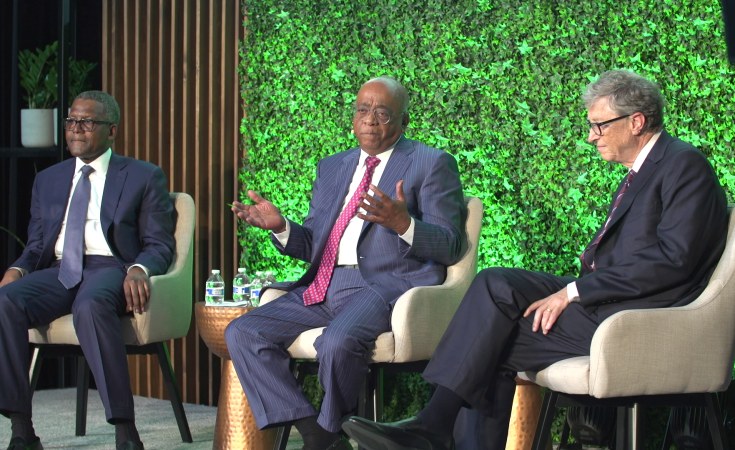 The Chairman, Dangote Group, Alhaji Aliko Dangote said that he had no idea the level of neglect in Nigeria's health sector until he had a conversation with Bill Gates.

Dangote said on Wednesday in New York at the 2019 Goalkeepers meeting of the Bill and Melinda Gates Foundation.

He said that since his conversion with Bill Gates, he became more interested in doing something to improve children access to nutritional food and healthcare system in the country.

Dangote went further to say that his work through his foundation had helped to shape policy around nutrition in Nigeria.

For example, the Federal Government now has a policy on food fortification, making it compulsory for producers of certain products such as rice, sugar, wheat, spaghetti, noodles to include vitamin supplements in their products.

"When I started my foundation in 1994, I never realised we had this massive challenge in the health sector.

"Really, it was mind-boggling when we had this agreement to collaborate with the Bill and Melinda Gates Foundation and that really opened my eyes to realise that there are a lot of challenges in health.

"At that time I didn't have the opportunity of meeting Bill but meeting Bill changed me into a different person.

"This is somebody that has nothing to do with us in Africa or Nigeria but he is putting his money and his soul into everything.

"He is very committed to helping humanity and that really surprises me a lot and I realised that he is a simple person and I never knew Bill would be this simple. He is a very soft-spoken guy and kind hearted.

"It is very difficult to find people like Bill in this world. My only prayer is that in the next few years, I will try and give my chunk of wealth to charity to," he said.

Meanwhile the Co-founder of Bill and Melinda Gates Foundation, Mr Bill Gates said that he wouldn't have had the kind of relationship he has in Africa without Dangote.

He commended Dangote for his work in helping children overcome malnutrition in Nigeria through food fortification.

He said that balance diet is important because a child's ultimate survival past the age of five, depends on the nutrition he or she gets.

Gates also thanked Dangote for being a true friend and teaching him how to communicate with people instead of sending them an email full charts and expecting them to understand and see the problems and solutions he sees.

He noted that the Bill and Melinda Gates Foundation was able to do more work in Northern Nigeria, with the help of Dangote who personally called six state governors and asked them to listen to him. (NAN)

Dangote Group to Transform Togolese Phosphate Into Fertiliser
Tagged:
Copyright © 2019 Vanguard. All rights reserved. Distributed by AllAfrica Global Media (allAfrica.com). To contact the copyright holder directly for corrections — or for permission to republish or make other authorized use of this material, click here.