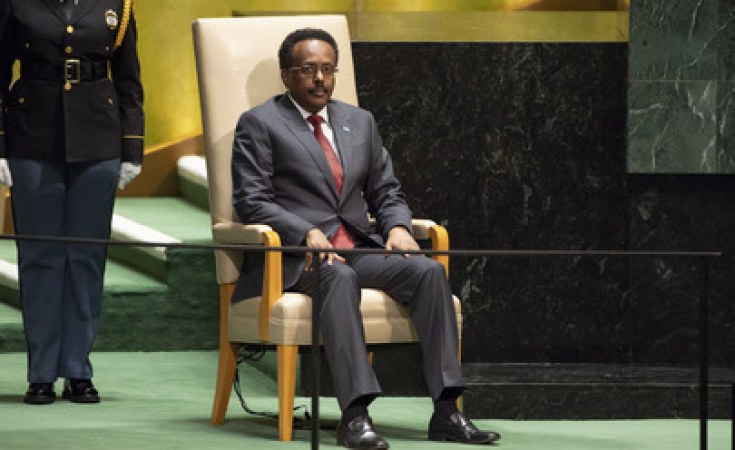 Kenya's President Uhuru Kenyatta and Mohamed Farmaajo of Somalia say they have agreed to normalise relations between the two sides, but fell short of a deal on the simmering maritime dispute.

In their first face-to-face meeting since March, the two leaders met in New York on Tuesday night to discuss Nairobi-Mogadishu relations which have recently gone cold as they fight over the flow of the sea border.

Somalia says the meeting brokered by Egyptian leader Abdel Fattah al-Sisi on the sidelines of the UN General Assembly in New York was only the first steps to normalise relations between the two sides.

Mr Sisi, the current chairman of the African Union, arranged the meeting after Kenya requested an out-of-court negotiations through the continental bloc over the maritime boundary dispute.

The case, due for public hearing in November, is currently at the International Court of Justice after Somalia sued seeking to redraw the sea boundary.

"Somalia and Kenya have agreed to work towards normalising relations without any implications for the maritime case at the ICJ, which will take its full course after Egyptian President Abdel Fattah al-Sisi convened a tripartite meeting on the margins of UNGA," Mohamed Abdinur, Mr Farmaajo's spokesman said.

"Strong neighbourly relations are important for the stability, economic development and people to people relations. Somalia welcomes the opportunity to work towards normalising relations with Kenya, as neighbours and partners, for a better common future."

Nairobi and Mr Kenyatta's government were yet to issue a statement on the talks by Wednesday afternoon.

The dispute had recently generated tit-for-tat moves affecting direct flights as well as issuance of visas at ports of entry.

Some regional experts have warned further deterioration could allow Al-Shabaab militants to thrive in their terror as the two countries also collaborate on counter-terrorism measures.

But as in their fruitless March meeting in Nairobi when Ethiopian Prime Minister Abiy Ahmed tried to mediate, Somalia has stuck to the court.

Kenya has warned that the decision of ICJ, which is binding on both sides, could offer little room for a win-win solution and hence may sow further political differences.

In their Tuesday meeting, Somalia reportedly said no discussion should be held on the dispute until the case is done.

The Deep Side of the Kenya, Somalia Maritime Border Dispute
Tagged:
Copyright © 2019 The Nation. All rights reserved. Distributed by AllAfrica Global Media (allAfrica.com). To contact the copyright holder directly for corrections — or for permission to republish or make other authorized use of this material, click here.