The headwear, which is associated with Wine's campaign, has been deemed an item of military clothing. The former pop star, who is hoping to oust President Museveni, denounced the ban.

Uganda outlawed on Monday the civilian use of red berets, a symbol of presidential hopeful Bobi Wine's "People Power" movement that he hopes will defeat President Yoweri Museveni, who has been in power since 1986.

The headgear, also worn by some Ugandan soldiers, was included in Uganda's first ever gazette of all-military clothing, deeming it to be "property of the state" which civilians cannot wear. Members of the public found in possession of the items could be "liable on conviction to imprisonment for a term not exceeding five years."

"The dress code for the UPDF (Uganda People's Defence Forces) has been gazetted. The action was endorsed by the top organs of the army which also commended the dress committee for concluding the task assigned to it years back," military spokesman Richard Karemire said in a statement.

He continued: "It manifests the commitment to define identity and outlook of a professional army as well as adhering to the EAC (East African Community) protocols."

The move has been criticized by Wine. "This beret ban is a sham. It is a blatant attempt to suffocate a successful threat to the autocratic status quo," the 37-year-old said in a statement. Nevertheless, Wine also insisted it would have no real impact.

"But People Power is more than a red beret, we are bigger than our symbol. We are a booming political movement fighting for the future of Uganda and we will continue our struggle for democracy," the statement said.

Former pop star Wine has announced he is running for president against longtime leader Yoweri Museveni in 2021 and has made the red beret his trademark, describing it as a "symbol of resistance."

Wine has garnered great support, especially among young Ugandans who have been attracted by his criticism of Museveni -- a message he has occasionally incorporated in his lyrics. 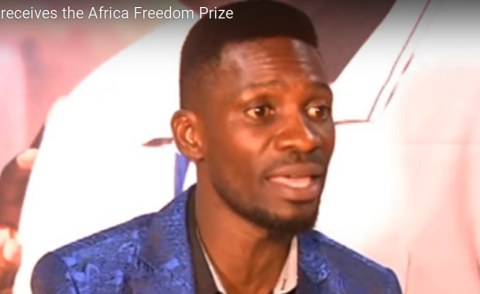 Museveni's Big Bobi Wine Problem
Tagged:
Copyright © 2019 Deutsche Welle. All rights reserved. Distributed by AllAfrica Global Media (allAfrica.com). To contact the copyright holder directly for corrections — or for permission to republish or make other authorized use of this material, click here.