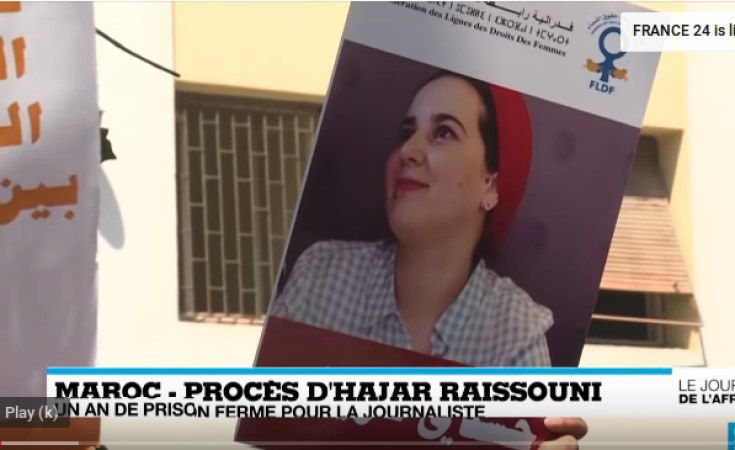 Hajar Raissouni has been sentenced to one year in jail for an abortion she denies having, in a case that has sparked mass protests over women's rights. The journalist says the charges stem from her government criticism.

A Moroccan court has sentenced 28-year-old journalist Hajar Raissouni to one year in jail for having an "illegal abortion," in a case that has drawn condemnation from rights groups and sparked indignation over the state of women's rights in Morocco.

Raissouni was arrested on August 31 as she left a gynecology clinic in the Moroccan capital, Rabat. Her lawyers told Human Rights Watch that after her arrest, police took Raissouni to a hospital where "staff subjected her to gynecological examination without her consent."

She was charged a few days later with having an abortion and for having sex outside of marriage.

Raissouni has denied having an abortion and told investigators she visited the clinic to receive treatment for a blood clot. The prosecution said the medical examination showed signs of pregnancy and of having undergone a "late term voluntary abortion."

Under Article 490 of Morocco's penal code, sex outside of marriage is illegal, as is abortion, unless the mother's life is in danger. The prosecutor said the gynecologist had been under surveillance for performing illegal abortions.

Her fiance, Amin Rifaat, was also sentenced to one year in prison, and the gynecologist to two years. Raissouni's lawyers have said they would appeal the sentence.

Critics have said Raissouni was arrested as part of a crackdown on Moroccan reporters criticizing the government.

Raissouni works for the Arabic-language daily Akhbar Al Yaoum, which frequently publishes articles criticizing the state. Reporters Without Borders (RSF) has called the publication "one of Morocco's last independent newspapers."

In a letter sent to her newspaper, Raissouni said while in custody she was heavily interrogated about her work as a journalist and her colleagues at the newspaper.

RSF said the charges were prompted by Raissouni's articles about people detained in connection with the so-called Hirak anti-poverty protests in Morocco's Rif region in 2016 and 2017.

The prosecution has said the case "had nothing to do" with her profession as a journalist.

"Under international law women have a right to make their own decisions about their sexual and reproductive lives. Criminalizing abortion is a form of discrimination against women," she said.

Africa One of Worst Areas for Press - But Some Countries Improve
Tagged:
Copyright © 2019 Deutsche Welle. All rights reserved. Distributed by AllAfrica Global Media (allAfrica.com). To contact the copyright holder directly for corrections — or for permission to republish or make other authorized use of this material, click here.