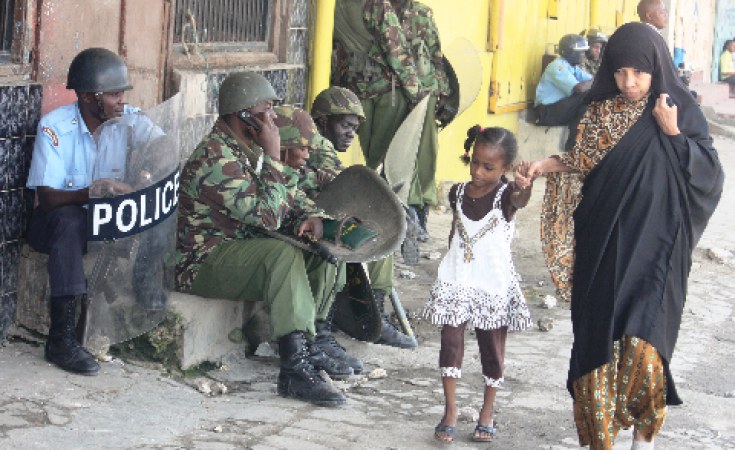 Norbert Allan/The Star
A woman and child pass by a squad of riot police at Majengo in Mombasa (file photo).
The Nation (Nairobi)
By Vincent Achuka

Kenyan security agencies have made a major step in the fight against terror after they arrested a suspect linked to the DusitD2 Complex attack in Nairobi.

Mr Fawaz Ahmed Hamdun, one of the most wanted Al-Shabaab operatives, was smoked out of his house in Majengo, Mombasa, on Sunday night by a multiagency team.

The insurgent group Al-Shabaab claimed responsibility for the attack that left 21 people dead eight months ago.

Other than facilitating the Dusit attack at 14 Riverside Drive, the suspect is said to have been involved in the recruitment of youth into the Al-Shabaab.

Mr Hamdun, 28, allegedly played a key role in facilitating the re-entry of DusitD2 suicide bomber Mahir Riziki to Kenya from Somalia to execute the attack.

He is reported to have coordinated Riziki's journey from Somalia and facilitated his stay.

Riziki was in 2014 placed on the most wanted list after being involved in the killing of a police officer at Royal Court Hotel. He then fled to Tanzania.

Mr Hamdun is suspected of facilitating the travel of Mr Salim Fariz Hadin, a young man from Majengo, to Somalia a fortnight ago.

Mr Hadin came to the attention of security agencies after he went missing on September 8.

Video footage obtained by detectives shows the two strolling in the streets of Mombasa on the day the latter's family reported he had disappeared.

They circulated posters and made reports to human rights organisations about their missing son.

Mr Hamdun was tracked and arrested. He has also been linked to the Ramadhan Kufungwa radicalisation network at the Coast, which targets the youth for Al-Shabaab recruitment.

Police Nab Suspect Behind Attack That Killed 11 Kenyan Officers
Tagged:
Copyright © 2019 The Nation. All rights reserved. Distributed by AllAfrica Global Media (allAfrica.com). To contact the copyright holder directly for corrections — or for permission to republish or make other authorized use of this material, click here.