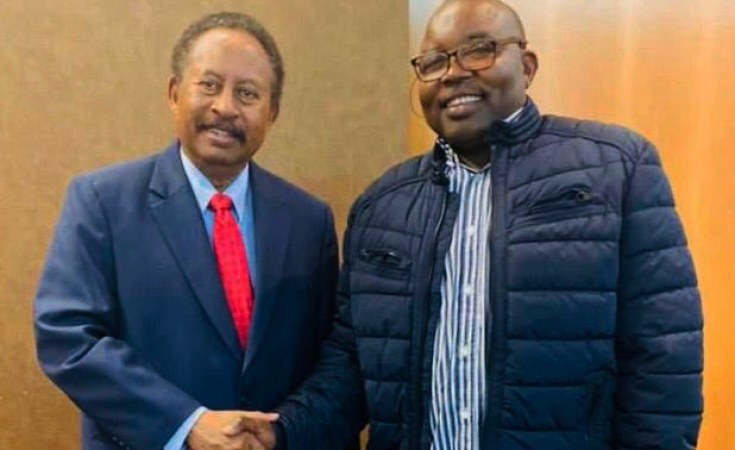 Paris — Sudan's Prime Minister Abdalla Hamdok met with French President Emmanuel Macron at the Élysée Palace in Paris yesterday to discuss bilateral relations and how France can help Sudan during its transitional period.

In a statement after the meeting yesterday, President Macron hailed the Sunday evening meeting - brokered by the French Foreign Ministry - between Prime Minister Hamdok and Sudan Liberation Movement (SLM-AW) faction leader Abdelwahid El Nur, as an "essential step" for peace in Sudan.

"We facilitated talks that Prime Minister Hamdok had yesterday with Abdulwahid Nur, who is in our country," Macron said at a press conference with Hamdok covered by AFP.

"I think the step taken yesterday is an essential step," he added. "The Sudanese deserve to finally live in peace and security."

Hamdok said that his meeting with El Nur - who has been living in exile in France - which he had expected to last 30 minutes, went on for nearly three hours and involved "very profound exchanges".

"We discussed the roots of the Sudanese crisis and possibilities for a solution and... we are going to lay the first stones for this edifice of peace," he said.

A statement issued after the meeting by the SLM-AW spokesman emphasised that El Nur met Hamdouk "in his personal capacity and not as Prime Minister".

After the meeting, the Movement affirmed its insistence on comprehensive change and full civil authority, that the former regime and its institutions be dismantled, and its cadres prosecuted.

The SLM-AW also renewed its refusal to recognise the Constitutional Declaration and the bilateral agreement between the Forces for Freedom and Change and the military council nor the government on which it was established, the statement emphasised.

"There is no peace, there is no accountability, there is no free press - the killing in Darfur, in the Nuba mountains, in the Blue Nile is continuing," he said.

Hamdok's visit to France was his first to Europe as prime minister, and comes after France's Foreign Minister Jean-Yves Le Drian visited Khartoum earlier this month.

Macron reiterated on Monday that France was ready to help rebuild Sudan's economy, announcing a €15 million aid package and plans for a donors' conference in the coming weeks.

El Nur said in August that his faction "will adhere to the revolution until a radical change takes place and a real civilian authority is established".

He explained that continuing with armed struggle is not the movement's option at this stage. "The SLM-AW will depend on popular struggle as an opposition tool, together with the Sudanese people, in order to reach this end, summarised in Just fall, that's all."

According to the SLM-AW leader, "The Sudanese people who forced Al Bashir to disappear from the scene are able to overthrow the junta and all other forces that hijacked the revolution in the name of the people, and pave the way for a state based on equal citizenship".

The Sudan Revolutionary Front (SRF, a coalition of the armed movements) reached an agreement with the FFC on the peace process in Sudan in the Ethiopian capital on July 25. The SLM-AW is no part of the SRF anymore. The movement withdrew when the coalition opted for a peaceful solution instead of continuing the armed struggle. El Nur says he will only join peace negotiations after Khartoum has restored stability and security in Darfur.

French President - Abdul-Wahid Nur Is Not Refugee in France

U.S. Govt Urged to Remove Sudan from List of Terror Sponsors
Tagged:
Copyright © 2019 Radio Dabanga. All rights reserved. Distributed by AllAfrica Global Media (allAfrica.com). To contact the copyright holder directly for corrections — or for permission to republish or make other authorized use of this material, click here.