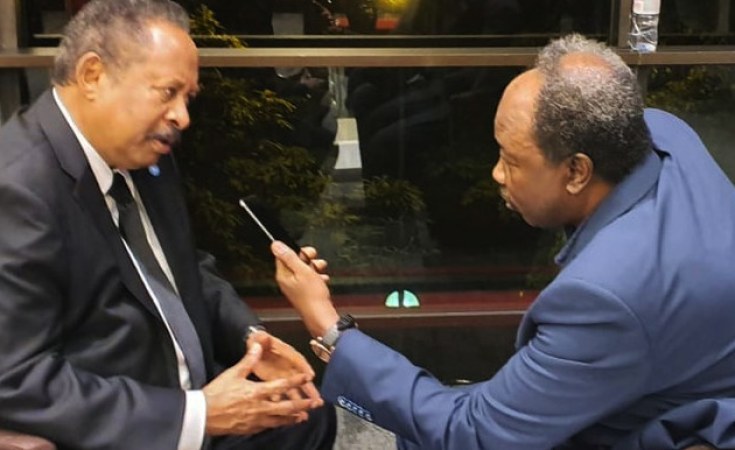 Paris — Sudan's Prime Minister Abdallah Hamdouk arrived with a high delegation in Paris on Sunday, after attending and addressing the 74th session of the UN General Assembly in New York.

During the meeting, El Nur voiced his movement's continued refusal to join peace negotiations in Sudan, reiterating that he does not recognise the transitional government.

A statement issued after the meeting by the SLM-AW spokesman emphasised that El Nur met Hamdouk "in his personal capacity and not as Prime Minister".

After the meeting, the Movement affirmed its insistence on comprehensive change and full civil authority, that the former regime and its institutions be dismantled, and its cadres prosecuted.

The SLM-AW also renewed its refusal to recognise the Constitutional Declaration and the bilateral agreement between the Forces for Freedom and Change and the military council nor the government on which it was established, the statement emphasised.

El Nur said in August that his faction "will adhere to the revolution until a radical change takes place and a real civilian authority is established".

He explained that continuing with armed struggle is not the movement's option at this stage. "The SLM-AW will depend on popular struggle as an opposition tool, together with the Sudanese people, in order to reach this end, summarised in Just fall, that's all."

According to the SLM-AW leader, "The Sudanese people who forced Al Bashir to disappear from the scene are able to overthrow the junta and all other forces that hijacked the revolution in the name of the people, and pave the way for a state based on equal citizenship".

The Sudan Revolutionary Front (SRF, a coalition of the armed movements) reached an agreement with the FFC on the peace process in Sudan in the Ethiopian capital on July 25. The SLM-AW is no part of the SRF anymore. The movement withdrew when the coalition opted for a peaceful solution instead of continuing the armed struggle. El Nur says he will only join peace negotiations after Khartoum has restored stability and security in Darfur.

Today, PM Hamdouk is scheduled to meet with the French President Emmanuel Macron at the Élysée Palace in Paris to discuss bilateral relations and how France can help Sudan during its transitional period.

There are high hopes for the meeting. In a statement via the official Sudan News Agency (SUNA) ahead of Hamdouk's meeting, Sudanese Minister of Finance and Economic Planning, Dr Ibrahim El Badawi, pointed out that the statement given by the French President before the 74th session of UN General Assembly in New York and his demand for removing Sudan from the US list of states sponsoring terrorism "has represented strong political support to Sudan and a big boost to its stances at the regional and international forums."

Minister El Badawi told SUNA after a meeting he held with the Director of Treasury at the French Ministry of Finance about future projects, stressing that Sudan would surpass the current economic difficulties within the coming nine months.

Earlier today, PM Hamdouk joined other international heads of state at today's funeral of former French President Jacques Chirac, who died on Thursday aged 86. France had declared to day a day of national mourning. A statement by the Élysée Palace said that 30 presidents and heads of state attended the funeral which was held at Hotel Des Invalides in central Paris where French citizens gathered to bid farewell for their late president.

The funeral service was held at Saint Sulpice in central Paris.

Sudan Peace Talks Going Well Despite Rebel Boycott
Tagged:
Copyright © 2019 Radio Dabanga. All rights reserved. Distributed by AllAfrica Global Media (allAfrica.com). To contact the copyright holder directly for corrections — or for permission to republish or make other authorized use of this material, click here.