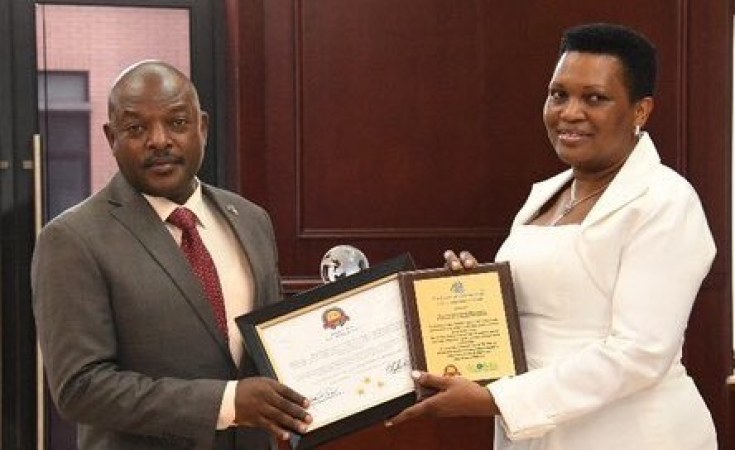 Burundi President Pierre Nkurunziza has yet again managed to create chatter on social media after receiving a 'special' guest at his presidential palace on Monday.

President Nkurunziza was picture standing next to his wife Denise Nkurunziza (the special guest) who paid him an official visit to present awards she received on her humanitarian work.

The First Lady was awarded a Certificate of Honour in recognition of her contribution in raising awareness among administrative and religious leaders, women and youth on the need to overcome the growing population in Burundi.

Other pictures captures the first couple standing side by side while displaying the award certificates.

"At a hearing @KwaNtare, the First Lady of #Burundi SE @1stLady Burundi presented to the Head of State SE @pnkurunziza the awards received in recognition of his action in the transformation of society and his commitment to the most needy," tweeted @NtareHouse.

This attracted varied reactions from the online community who could not understand why the First Lady had to seek a formal audience with her husband.

"This killed me in so many respects I don't know what to list and what to leave out! But first, when did a wife need a formal audience with her husband! Sacré Burundi," said @KalindaMwene.

"Do they live together? It is bringing rumours on a possible separation in the presidential palace!" wrote @mugireje.

"Is this a Joke?" asked @solemanzi.

In May this year, President Nkurunziza made headlines for publicly gifting his 12-year-old daughter with an envelope of cash for being well behaved.

Naomie Nkurunziza was awarded alongside senior state officials, farmers and the country's national football team which had just qualified for the 2019 Africa Cup of Nations

Also awarded at the ceremony which was held on May 1, 2019 was a judo champion, governors and district administrators. The ceremony took place at a sports stadium at Rumonge, about 80km from the capital Bujumbura.

Will African Leaders Call Burundi to Order?
Tagged:
Copyright © 2019 Nairobi News. All rights reserved. Distributed by AllAfrica Global Media (allAfrica.com). To contact the copyright holder directly for corrections — or for permission to republish or make other authorized use of this material, click here.