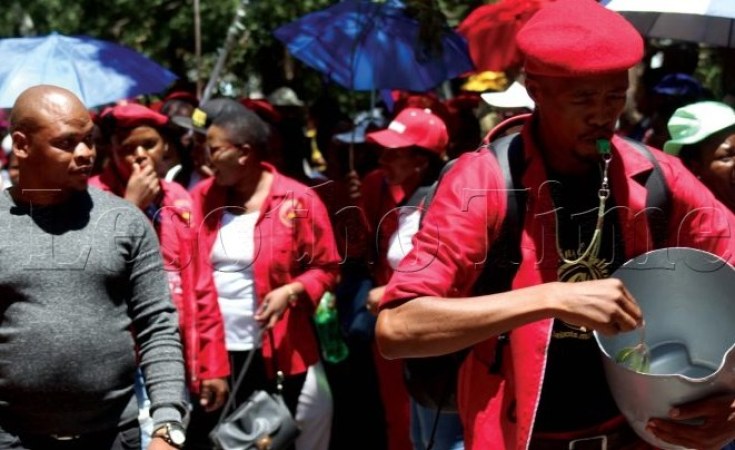 The government has slashed the salaries of about 4 000 teachers who went on strike to press for better pay at it seeks to enforce its no work no pay policy.

Each of the affected teachers will have about M2 500 deducted from their salaries this month. Teachers' unions have vowed to fight the decision.

The Principal Secretary in the Ministry of Education and Training, Thabang Lebese, confirmed to the Lesotho Times that the 4 000 teachers would have their September salaries slashed by up to M2 500 to cover for the days they did not report for work.

Entry level gross salaries for teachers are pegged at M7 500 per month while senior teachers earn M9 000 per month. The implementation of the 'no work no pay' policy means that some teachers will earn very little after statutory and other deductions.

The teachers, who coalesced under the banner of three teachers' unions- the Lesotho Association of Teachers (LAT), Lesotho Teachers Trade Union (LTTU) and the Lesotho School Principals Association (LeSPA), downed tools on 12 August 2019.

They went on strike to press the government to award them an eight percent salary increment for the 2019/20 financial year.

They also want the government to weed out ghost workers from the payroll.

However, the government said it could not afford the eight percent increment and the two parties subsequently agreed that the increment would be implemented in the next financial year.

Early this month the government warned the teachers to call off their "illegal" strike failing which, it would implement a no work, no pay policy.

Yesterday, Dr Lebese told this publication that teachers who did not heed the government's call to return to work would have their salaries slashed by between M2 300 and M2 500 for the days they were not at work.

"We got the list of teachers who were not reporting for work this month," Dr Lebese said, adding, "The no work, no pay principle will apply this month".

"One is paid for the work that they have done. They (teachers) will only be paid for the days that they worked. They will see the deductions tomorrow (today) when they get their salaries. The employer has the right to withhold the salaries when the strike is illegal. Ultimately, the employer can impose a lockout on striking employees and engage new people to fill in the vacancies," Dr Lebese said.

Contacted for comment, the spokesperson of the teachers' unions, Tšepo Lethobane, said they would engage the government to reverse its decision to slash the teachers' salaries.

Mr Lethobane said the salary cuts would be a drastic move considering that the teachers returned to work after being asked to do so by the teachers' unions.

"We expect the teachers to get their full salaries tomorrow (today). If the salaries are cut, we will appeal to the government to have the teachers reimbursed," Mr Lethobane said.

The restive teachers initially went on strike in February 2019 to force the government to address their long-standing demands for salary increments and improved working conditions.

They only called off the job action after the government promised to address their grievances. However, they lost patience with the government's slow pace of dealing with their issues and they went on strike again on 12 August 2019.

Tagged:
Copyright © 2019 Lesotho Times. All rights reserved. Distributed by AllAfrica Global Media (allAfrica.com). To contact the copyright holder directly for corrections — or for permission to republish or make other authorized use of this material, click here.