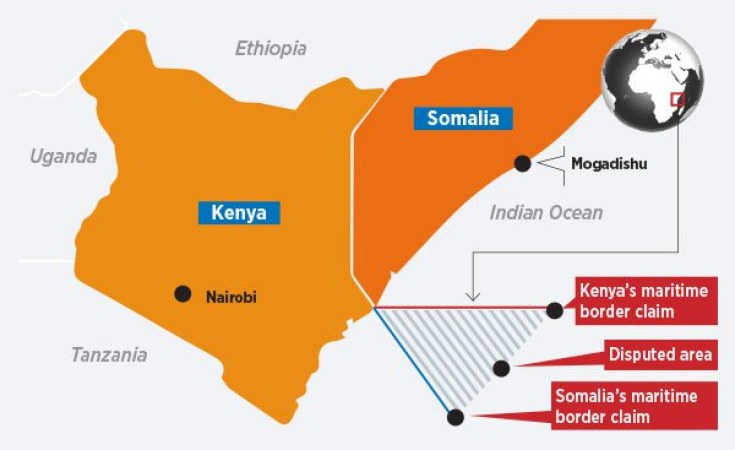 Daily Nation
The area in the Kenya-Somalia maritime border dispute forms a triangle east of the Kenya coast.
The Nation (Nairobi)
By Aggrey Mutambo

Kenya says it is still 'committed' to help rebuild Somalia, in the face of an ongoing bilateral row over the maritime boundary.

Mr Namwamba used the two-day event to clarify Kenya will continue to take part in Somalia's rebuilding, in spite of other challenges.

"Kenya has always supported reconstruction of Somalia, with the 1st Transitional Government of Abdullahi Yusuf (Ahmed) made and hosted in Nairobi in 2004. The commitment remains," he said referring to Somalia's first Transitional President who died in 2012.

"Somalia ties are steeped in a history of shared destiny. We owe it to our people to keep the ties alive."

Mr Namwamba is the first senior government official to make an official visit to Somalia in nearly six months.

The tension between Nairobi and Mogadishu had been sparked off by a maritime boundary row.

Somalia has sued Kenya at the International Court of Justice, seeking to have the borderline redrawn. The case is due for public hearing on November 4.

But while Kenya disagreed with the case, arguing alternative means had not been exhausted, the row escalated with claims Somalia was already dealing in oil blocks in the contested area, claims Mogadishu denied.

But the two leaders agreed to reduce tensions between the countries and cooperate on other matters.

Mr Namwamba did say he held bilateral talks with Somali Prime Minister Hassan Khaire on matters of "mutual interest" to the two countries, on the sidelines of the Forum on Tuesday evening.

At the forum, he was among several dozens of political leaders, business people and diplomats who gathered in Mogadishu for the fourth Somalia Partnership Forum (SPF), meant to "to take stock of the progress made by the country as well as agree on priorities ahead," according to organisers.

The participants who also included representatives from the UN, African Union, the European Union and several donor countries, were discussing the Mutual Accountability Framework, a document prepared in 2017 to list commitments on Somalia's political reforms, security, economic development, and recovery and humanitarian assistance; part of the country's rebuilding programme.

Those commitments include supporting preparations for national elections and the constitutional review to be completed within the agreed timelines; targeting and degrading al-Shabaab and building Somalia's security agencies as well as strengthening its justice system.

Other steps include debt relief as well as financing needs for the country.

Somalia may have risen recently, benefiting from donors and its diaspora. But participants warned the challenges, such as the recent resurgence of Shabaab attacks and continuing political tensions between the federal government and the federal state authorities, could undermine plan for universal suffrage elections in 2021.

"We are under no illusion to underestimate the myriad of challenges ahead for the country's road to full recovery, which demands concerted political and financial commitments from both local stakeholders and international partners," James Swan, the UN Secretary-General's Special Representative to Somalia said.

Mr Francisco Madeira, the AU Special Representative to Somalia said there had been a slow support for AU forces battling al-Shabaab.

"Any further delays in this area will continue to negatively impact upon operations, as witnessed over the last year, thus affecting the implementation of Amisom's CONOPs and the Transition Plan."

Under the Amisom Concept of Operations, the force generation refers to provision of military resources, mainly from Somalia's partners to enable troops complete their mission.

Amisom is also supposed to help retrain the Somali National Army. But it has recently faced funding shortages after the European Union reduced its budget by 20 per cent.

Kenya Urged to Stay Away From Somalia Border Case