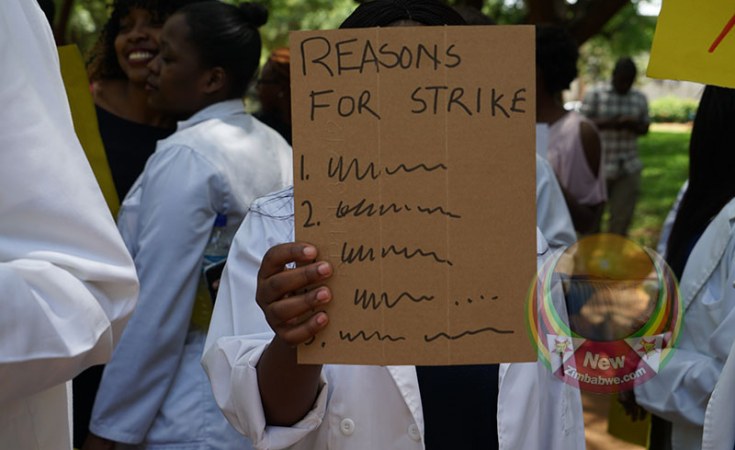 A month into a strike by doctors in the country's public hospitals, Rudo Mbofana can't find relief from her constant back pain — or her frustration.

The Harare resident said she had been referred to Parirenyatwa General Hospital, the capital's largest medical center, "but there is no help. We are just gathering here in pain, in shame and in agony."

An untold number of Zimbabweans have been turned away from public medical facilities since Sept. 3, when just more than 500 junior doctors, paid less than $200 a month, went on strike, demanding better wages as well as equipment and supplies for treating patients.

Hundreds of senior doctors with the same complaints joined the strike Thursday, further diminishing treatment options in the southern African country of 14 million.

On Friday, labor groups representing the doctors rejected the government's offer of a 60% salary increase. It would have been paid in Zimbabwe's devalued currency and not the U.S. dollars that the doctors sought.

"They're asking the government to match their salaries with what they were earning" before the country's economic collapse, explained Dr. Fortune Nyamande, spokesman for the Zimbabwe Association of Doctors for Human Rights. His group does not represent labor nor is it involved in negotiations, but Nyamande was apprised of Friday's developments.

The government has threatened to withhold the pay of striking doctors. Dr. Paulinus Sikosana, chairman of its Health Services Board, said it won't pay someone who won't work.

The World Health Organization's representative to Zimbabwe, Dr. Alex Gasasira, encouraged negotiations between the striking doctors and the government.

"We hear that many patients are being turned away, some of them with very serious conditions," Gasasira said in a phone interview. "So we are concerned that the most vulnerable people … would not be able to access the services that they would require."

The strike has paralyzed the public health system.

"We know that something terrible is happening. We are hearing of pregnant women dying, victims of road traffic accidents dying," Nyamande said, adding that he doubts the accuracy of government statistics on health and mortality.

Zimbabweans such as Mbofana gauge the health system based on personal experience.

Her back hurts and her prospects are poor. Turned away from public health care, "I was advised to go and seek treatment from private clinics or surgeons," Mbofana said. "But how do I raise the money?"

Patients admitted into public hospitals before the strike have no guarantee of quality care, either, given gaps in staffing and shortages of medical equipment, such as diagnostic tools, surgical gloves and pain medicine.

A woman who identified herself only as Kukuwe said her sister's health is worsening while at Parirenyatwa.

"No doctors are coming to see patients," Kukuwe said. "The patients are stranded and are not receiving help because there are no doctors to write prescriptions."

Senior doctors last month had joined their junior counterparts in demonstrating for the release of Peter Magombeyi, who had led the strike as acting president of the Zimbabwe Hospital Doctors Association. He allegedly had been abducted from his home Sept. 14, resurfacing several days later outside of Harare, dazed and in pain. He initially told VOA in a phone interview that he remembered "being electrocuted at some point."

The group Human Rights Watch says it has confirmed at least 50 abductions of activists and government critics so far this year.

Zimbabwe police had blocked Magombeyi from leaving a Harare private hospital but ultimately heeded a high court's order to allow the doctor to seek care in South Africa. He reportedly is being treated at an undisclosed medical facility there.

Zimbabwe Turns to Regulations in Bid to Stem Currency Plunge
Tagged:
Copyright © 2019 Voice of America. All rights reserved. Distributed by AllAfrica Global Media (allAfrica.com). To contact the copyright holder directly for corrections — or for permission to republish or make other authorized use of this material, click here.