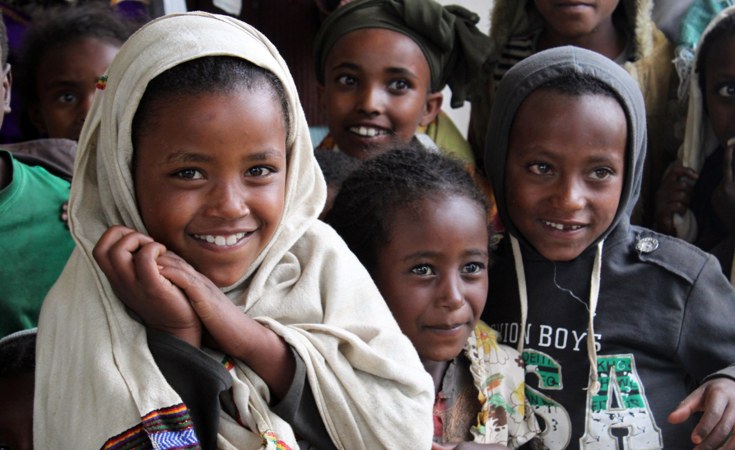 UK Department for International Development/Flickr
Children at a vaccination clinic near Sululta, Ethiopia, May 2012.
The Conversation Africa (Johannesburg)
analysis By Catherine Porter and Wei Fan

Investments made in early childhood last a lifetime, and the earlier in life, the greater the return, according to James Heckman who was awarded a Nobel Prize for economics. Conversely, shocks to child development also can last a lifetime. For example, children who were young at the time of the 1984 famine in Ethiopia are 5cm shorter at adulthood, have lower education and are more likely to have recently been ill.

When assessing long-term effects of early life circumstances, it's difficult to disentangle biological from social processes. An outstanding question is: why can't children catch up after shocks to their development?

It's hard to know whether those in Ethiopia in 1984 were permanently affected by the famine because there are biological processes at work which prevent them catching up, or because their parents stopped investing in them in favour of their siblings who were better off. In other words, do parents reinforce differences, or do they try to compensate for them?

To answer this question, we conducted a study to examine how parents in a very resource-constrained setting responded to differences in their children's ability. We used data from the Young Lives cohort study in Ethiopia, which is a study of childhood poverty following children born at the turn of the millennium as they grow up.

The children's ability was measured by how they scored on a vocabulary test. We assessed around 1 400 children aged between 5 and 8 years old. They were all pairs of two siblings. We took the difference between these test scores and examined the relationship between these and differences in spending on education for each child.

We found that parents tended to invest more in the child who has worse cognitive achievement and used their scarce resources to spend more on education. Even in a sample of extremely poor households, those who comparably had more resources were most likely to compensate for differences in ability. These differences are significant but marginal in value.

When following up the children three years later, we found no change in the gap between the siblings, despite parent's efforts. This indicates that the achievement gap for those children who suffer from severe early life conditions is due to biological processes, even though their parents try to help them catch up.

There is a possibility that differences in test scores were already caused by parents investing differently in each child up to the point that they took the test, which is a common problem in studies of this type. To deal with this problem, we attempted to isolate those differences in cognitive development that were caused by factors outside of the household's control.

For this, we used the difference in rainfall levels during early childhood of the two siblings. In Ethiopia, rainfall is highly correlated with income and poorer parent's ability to invest.

We see this as evidence of how poor households are trying to improve the life chances of all their children, and even a small improvement in their wealth leads to greater efforts to compensate for adverse shocks. But these efforts were not successful. We think this is due to the small resources at their disposal. The importance of interventions at the earliest stages of life also cannot be emphasised enough.

As part of our research, we explored existing economic theories about how parents allocate their scarce resources in the household. There are two competing ones.

Many economists subscribe to the idea that a family that wants to maximise the total income of all children should invest in the highest ability child, or reinforce differences (the so-called efficiency argument). So, other things being equal, if you have a sibling who is smarter than you, your parents will invest in them more than in you.

However, a competing theory is that parents are averse to inequality between their children, and would rather compensate for any differences. In developed countries, income is higher and the government plays a stronger role: schooling is compulsory, public education is free, and legislation prohibiting children from working full time is strongly enforced.

In developing countries, many poor parents face even tighter financial constraints, and the prevalence of child labour means there are starker trade-offs: invest in your child now to ensure a brighter, more prosperous future? Or, have them use their time to work in order to feed the family today? It's often assumed that in the poorest countries, the constraints will outweigh the desire for equality, and therefore parents will reinforce differences.

Ethiopia's economy has been growing rapidly in the past ten years, and an expanded social safety net. But many households are still very poor and dependent on rain-fed agriculture. Malnutrition rates are high, and expansion in access to education has not translated into improved learning outcomes.

Protecting children from adverse events in early childhood will become even more important as Africa will face the consequences of climate change. Governments need to do more to support parents in what are expected to become increasingly tough conditions. This includes social additional social protection measures. And it should include interventions like rainfall insurance and climate change adaptation to help parents do the best for their children.