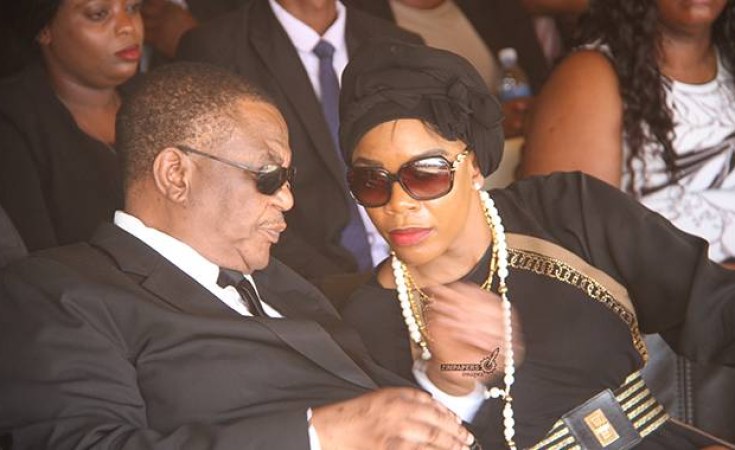 Justin Mutenda/The Herald
Vice President Costantino Chiwenga and wife Mary at the burial of his sister Margaret Machekabuwe in Marondera. Chiwenga is in China were he has been receiving medical treatment.
New Zimbabwe (London)
By Costa Nkomo

THE presidential suite at Parirenyatwa Hospital has turned into a white elephant with senior government officials including the President Emmerson Mnangagwa and his deputies all choosing to get treatment outside the country, NewZimbabwe.com has learnt.

With a rolling doctors strike entering its second month last week, the spotlight has remained focused of the country's biggest referral health institution where the medical practitioners routinely congregate and picket demanding a review of their working conditions.

A junior doctor who identified himself as Simon Madhuveko said it is sad that top officials from government from President Mnangagwa, Vice President Constantino Chiwenga and his counterpart Vice President Kembo Mohadi have abandoned local facilities after running them aground.

Mnangagwa's predecessor Robert Mugabe died in Singapore last month where he was being treated for prostate cancer. Mugabe had become legendary for travelling to the Far East for medical attention. His sister Bridget spent four years on life support at Parirenyatwa before she died two years ago.

Said Madhuveko: "Unfortunately our government officials don't use the systems that they are running. When they get sick they go outside the country.

"They go to South Africa, Singapore, Egypt and China where systems are working. It is the reason they don't put money into making sure local institutions are running properly and that as doctors we are well looked after. They get comfort elsewhere."

Madhuveko drew parallel between Zimbabwe's leaders and South African anti-apartheid icon Nelson Mandela who he said was treated in his country up to the time of his death in 2013.

"Parirenyatwa has a presidential suite that is not being used because our executive go outside the country where they are looked after. So they don't care about what is going on at Parirenyatwa because when they get sick they will just fly off for foreign treatment. They get a running stomach they fly off to South Africa for diarrhoea treatment as if we cant look after that," he said.

When reached for comment health minister Obadiah Moyo was unavailable for comment claiming he was in a meeting.

"I am in a meeting , may you call me after 20 minutes," the Health Minister said.

"What we have are private wards with some executive rooms which are not specified or reserved for anyone in particular. These have been used and continue to be booked by those who can," said Dhire.

He however could not confirm whether the rooms were booked as of Monday instead challenging NewZimbabwe.com to visit for a guided tour..

Two years ago Mnangagwa was airlifted to South Africa after a poisoning scare at a Zanu PF rally in Gwanda. Mohadi and Defence Minister Oppah Muchinguri-Kashiri were also treated in the neighbouring country after suffering injuries in a bomb blast ahead of last year's elections in Bulawayo.

Currently Vice President Chiwenga is in China were he has been receiving treatment having been referred from South Africa.

'Mnangagwa Should Have Fired All Security Chiefs After Rally Bombing'