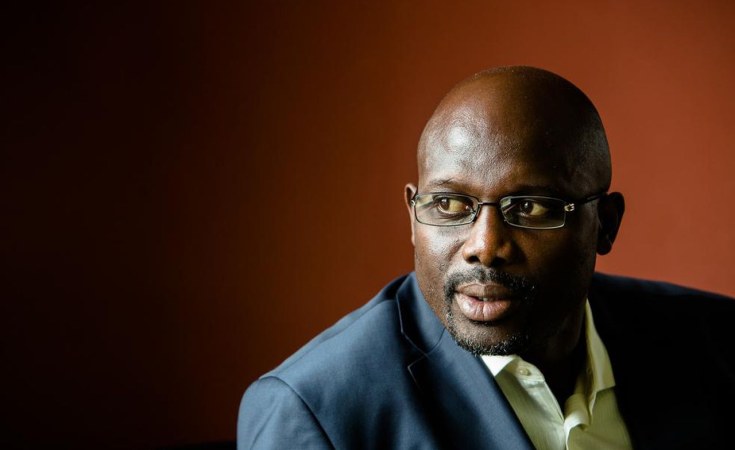 "Government is not weak," declared Information Minister Eugene Nagbe during a press conference held over the weekend. The press conference was held in the wake of a standoff between Police and a crowd of angry protesters who had gathered at the Catholic Hospital in response to concerns that her visa appointment at the US embassy was about to be aborted by LNP officers who were reportedly taking her to the Police Headquarters.

The drama ended peacefully but at no small cost to the image of government, including President Weah especially. But Information Minister Eugene Nagbe's weekend reassurance that government is not weak rings hollow because, from all indications, it is government functionaries by whose ill-conceived policy advice and actions tend to cast government's image in an unfavorable light.

Why, for example, did Police attempt to interfere with Justina's movement from the Hospital where she had been admitted for treatment for injuries received from her abductors none of who has been arrested so far? In the final analysis, government had to back down and allow Justina to leave hospital. Invariably, these recent developments conveyed a public impression of a government acting in wanton violation of the law when it attempted to unlawfully restrain Justina's movement, especially after it became public knowledge that she was due for a visa appointment at the United States Embassy in Mamba Point.

But who is to blame for creating such a crisis other than those who advised it and probably egged President Weah into endorsing it. But they have virtually remained in the shadows and it is President Weah who is now taking the flak for their ill-advice. The resultant tension from the October 4 standoff was completely unnecessary and did, in effect, cast a negative impression of President Weah as a weak and ineffectual leader.

Perhaps Information Minister Nagbe's declaration that government is not weak may be a knee-jerk response to the October 4 developments or, as some highly placed sources suggest, is a subtle warning that the use of overwhelming force is in the cards and will certainly play out in any future similar scenario. From hindsight and experience, the Daily Observer remains fully cognizant that it is very easy to start a crisis, war but it is very difficult to end a crisis or stop a war.

Looking back, for example, the Daily Observer notes the veteran civil rights crusader and journalist, Albert Porte, who recollects in his publication, "The Day Monrovia Stood Still", virtually fell to President Tolbert's feet, pleading with him not to use force against the planned April 14, 1979 protesters. But President Tolbert simply dismissed him with the retort, "government cannot look weak". And as sure as night follows day, President Tolbert ordered the security forces to shoot into the crowd. He later, however, said on radio that he had ordered the security to shoot at the lower extremities meaning their legs.

But by then, the Tolbert government, faced with growing economic and political crisis, was hanging by a thread and it was no surprise that it fell only a year later in 1980. Fast forward to April 6, 1996, a little over two decades ago when two warlords, Kromah and Taylor, acting in concert, attempted to arrest another warlord, Roosevelt Johnson. Despite being warned against it by concerned Liberians including the late Archbishop Michael Kpakala Francis, the duo persisted in their misadventure.

In a period of just six (6) days, the entire city of Monrovia was completely looted with thousands dead, all because of men with inflated egos and each with an exaggerated sense of self-importance, attempting to look strong and invincible. In the final analysis, a band of naked fighters, armed for the most part with machetes, succeeded in routing the combined forces in Monrovia. Kromah fled to Guinea through Bopolu while Taylor sought sanctuary at his Congo Town residence, safely ensconced in ECOMOG's protection.

But such reckless bravado came at a huge cost to the Liberian people. The Daily Observer strongly urges President Weah to draw lessons from these experiences and do all he can to avoid going down a similar path. There are indeed numerous other ways in which government can exert itself or in which President Weah can demonstrate strength and resolve.

One of such ways is to tackle corruption in a meaningful way; another but very significant way is for President Weah to give teeth to his previously declared stance on the establishment of a war and economic crimes court for Liberia by writing the Secretary-General of the United Nations, requesting assistance to set up the court. Those are indeed demonstrable and concrete steps which, if taken, could serve to change the current trajectory and place the government once again in the good favors of the people.

In this regard, it is important to underscore that President Weah does not enjoy the luxury of time to take the appropriate requisite measures to set things right again.

As stated before in previous editorials, President Weah should be careful to avoid casting an impression of a leader whose words or utterances mean the very opposite of what he says. He must not allow others to determine and define who his enemies are and, above all, he should appreciate and understand the nature and immensity of the tasks at hand and seek to exploit every opportunity to turn the country around for the better.

To do anything less will only play into the hands of his detractors, many of who pretend to wish him well but who will scheme and conspire to ensure his exit from office. And he should never lose sight of the fact that some of those now appearing in the photo were never there before but now they are the ones shining in the photo. And this simply means that a lot of people, even his supporters are becoming or have become disaffected.

Information Minister Nagbe should therefore reflect on history and stop stoking fires which, once lit, could likely consume himself.

Next Story
Tagged:
Copyright © 2019 Liberian Observer. All rights reserved. Distributed by AllAfrica Global Media (allAfrica.com). To contact the copyright holder directly for corrections — or for permission to republish or make other authorized use of this material, click here.