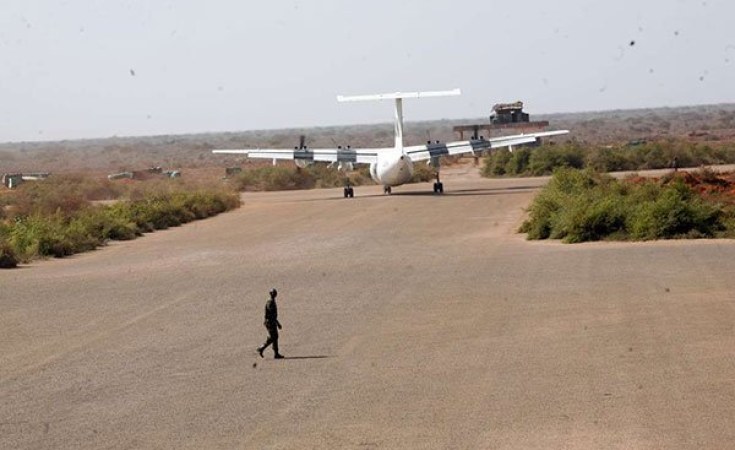 Evans Habil/Daily Nation
A plane is seen at the Kismayu airport in the picture taken on January 22, 2014.
The Nation (Nairobi)
By Aggrey Mutambo

Somalia has protested what it said is the violation of its airspace by Kenya after an aircraft flew from Nairobi directly to Kismayu instead of first landing in the capital Mogadishu.

On Saturday, a Kenyan-registered Fokker 50 plane, 5Y-JXJ, carrying politicians, landed in Kismayu, the capital of Jubbaland state without making a stop over in Mogadishu as required.

In September, Somalia directed that all civilian aircraft to first stop in the capital Mogadishu before proceeding to Kismayu.

The directive followed the re-election of Jubbaland president Ahmed Madobe, whose victory was endorsed by Nairobi and rejected by Mogadishu.

The Fokker 50 plane was carrying former Somali state presidents Sharif Hassan Aden of Southwest and Galmudug's Abdikarim Hussein Guled. Several Somali MPs were also onboard heading to Kismayu ahead of the planned, but controversial, swearing-in ceremony of Madobe.

Mogadishu says it annulled the August poll in which Madobe won, although Jubbaland argues there is no legal basis to interfere with elections in a federal state.

It is not clear why and how the aircraft, leased by Jubba Airways, managed to violate the flight restrictions. This week, Mogadishu had indicated it could relax the limitations from next week as long as no swearing in took place.

Jubba Airways, which operates between Somalia and Kenya, is owned by Kenyan and Somali politicians and businessmen.

Jubbaland officials had initially spun the story to show they had bought it from South Sudan for $2 million, according to Garowe online.

From 1994 to 2016, the Somalia's airspace was totally controlled from Nairobi. Some services were later relocated to Mogadishu. However, due to shortage of personnel, some operations are still ran from Nairobi where Somalia's engineers are trained.

The protest against Kenya comes amid deteriorating ties between Nairobi and Mogadishu over the maritime border dispute which is before the UN's International Court of Justice.