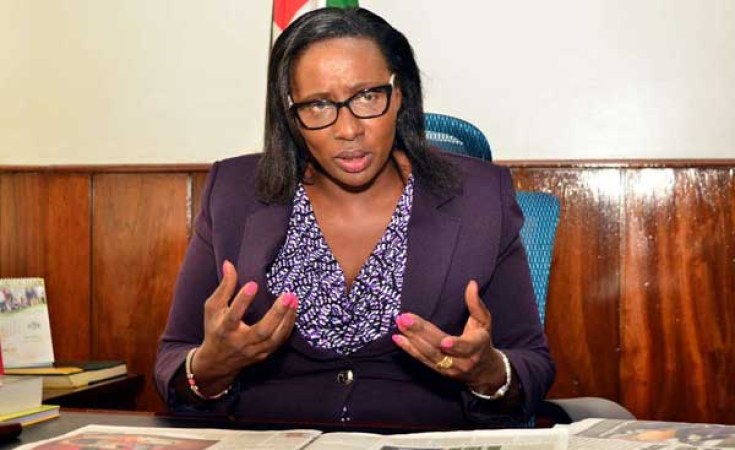 Embattled Nairobi County Assembly Speaker Beatrice Elachi has returned to her office on Wednesday morning 13 months after her dramatic eviction.

Ms Elachi, who was escorted by Orange Democratic Movement (ODM) party ward representatives and some Jubilee MCAs, her return will "bring back sanity" in the House.

She made her grand entrance some minutes before 8am amid tight security around the assembly's precincts.

Speaking to the media at her office, Ms Elachi said women at the assembly are tired of intimidation and it was time that changed.

"I have been the speaker all along and I am now back to bring sanity at this assembly. It is time we say enough is enough," said Ms Elachi.

She went on to lash out at the Majority Leader Abdi Guyo over his utterances at the plenary on Tuesday, warning him that she would not just sit and watch him abuse and degrade her in public.

"You cannot be a leader and abuse women in the assembly anyhow. I will not keep quiet while you go on calling me names," she said.

On her part, Ms Wanga asked the Speaker to put her foot down and not be intimidated, assuring her of her full support.

According to Ms Elachi, the continued abuse she has endured from Mr Guyo is what prompted her to make a comeback to the assembly to "set the record straight".

Ms Elachi has come under siege since her ouster in September 2018 which was followed by chaotic scenes in her attempts to return to the office.

She got a reprieve in May this year after the Employment and Labour Relations Court quashed the decision by the assembly to censure her, arguing that the House committee had no powers or jurisdiction to impeach Ms Elachi without according her due process.

The court further prohibited the MCAs from debating any motion to remove Ms Elachi without according her due process.

Despite the reinstatement by the court, the ward reps maintained that they would treat the besieged Speaker as a stranger, vowing not to allow her back into the assembly.