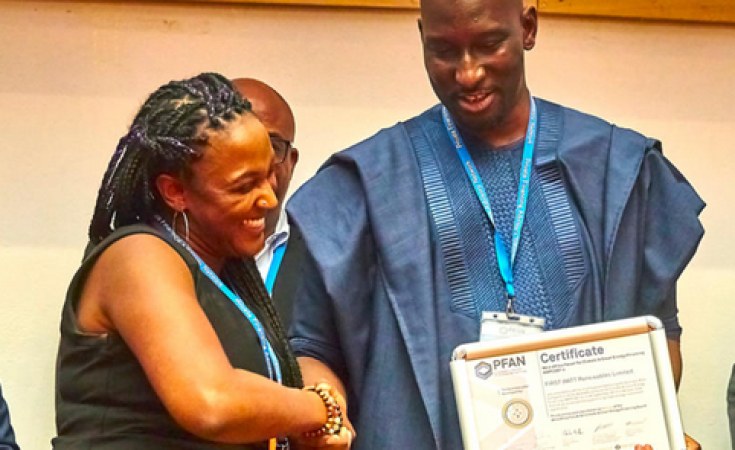 AfDB
Presented by young Nigerian entrepreneurs Sherisse Alexander and Oluwole Ewéje, First WATT Renewables runs its project through an 'SPV', or 'Special Purpose Vehicle' set up to isolate financial risk, with a 'take-or-pay' model, that is, an indexed electricity-purchase agreement in dollars.
Content from our Premium Partner
African Development Bank (Abidjan)

First WATT Renewables were winners of the 4th West African Forum for Climate and Clean Energy Financing (WAFCCEF) contest, held on Thursday 26 September in Abidjan and co-organized by the African Development Bank.

The company, based in Canada, is a private sector clean-energy technology producer and supplier of sustainable energy solutions using an innovative mix of photovoltaic systems.

Presented by young Nigerian entrepreneurs Sherisse Alexander and Oluwole Ewéje, First WATT Renewables runs its project through an 'SPV', or 'Special Purpose Vehicle' set up to isolate financial risk, with a 'take-or-pay' model, that is, an indexed electricity-purchase agreement in dollars. Energy will be provided as a service to the buyer, who makes flat-rate monthly payments. According to its initiators, the project eases the transition towards green, sustainable energy production.

Another award-winning project, Sweep Ghana, transforms energy-rich waste, including 20% of Accra's household waste, to produce 15 MW of electricity for the national grid. A third winning company, Dutch & Co, helps to bridge the gap between supply and demand for electricity in Africa. It reduces demand by installing low-energy LED lighting and increases supply using solar PV.

"The candidates and their coaches had work to do. There were projects at different stages of maturity. But for us, the question was this: Which project has the best chance of securing funding straight away? There were many really appealing projects, different types of technology in different countries, and we had to make a choice," explained the jury as it delivered its verdict. Eight projects were submitted, from Côte d'Ivoire, Ghana, Togo, Cameroon and Nigeria.

"WAFCCEF plays a crucial role in developing the next generation of clean energy entrepreneurs on the continent and serves as a link with investment initiatives by the African Development Bank and other financial institutions," said Daniel Schroth, acting director of the Bank's renewable energy and energy efficiency department. "We have previously supported other WAFCCEF winners through the Sustainable Energy Fund for Africa (SEFA) and we hope to be able to select some additional projects for the Bank's pipeline."

The PFAN network consists of more than 150 experts in climate funding and clean energy from around the world. The programme is hosted by the United Nations Industrial Development Organization (UNIDO) and the Renewable Energy and Energy Efficiency Partnership (REEEP) in Vienna. It is also supported by the governments of Australia, Japan, Norway, Sweden and the USA, and by the Kigali Cooling Efficiency Program (K-CEP).

"I was very impressed by the quality of the projects submitted. I was also pleased with the positive reactions of the investors attending the event, demonstrating the added value of the PFAN approach to the development and financing of clean energy and climate projects," said Albert Boateng, PFAN coordinator for West Africa.

The first WAFCCEF was won by the SMEFUNDS-GEB company ('Small and Medium Entrepreneurship Fundamentals - Green Energy & Biofuels'), a Nigerian start-up behind the first production installation for cooking fuels in the form of a bio-ethanol gel made from plant waste. In 2014, this company received a $580,000 grant from SEFA to finance technical studies, legal and financial advisory services and a full environmental and social impact assessment.

The Ivorian company Ivoire Hydro Energy was the winner of the second contest, held in 2015. It submitted a project for the design, construction and operation of a 44-MW hydroelectric power plan on the Bandama river. Last year's contest was won by the Masada Waste Transformers company with a project to deploy a network of decentralized waste recovery plants throughout Freetown, capital of Sierra Leone.