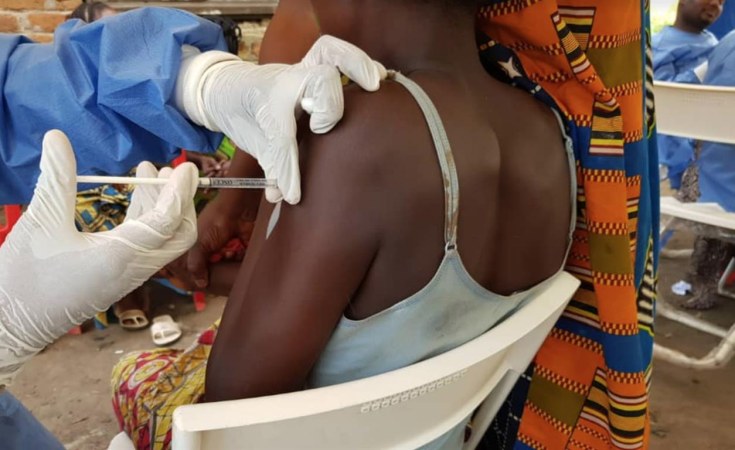 In Mabalako, a rural health zone in the North Kivu province of the Democratic Republic of Congo (DRC), the Ebola epidemic has taken its toll on the fragile health system.

Many doctors and health workers have been hired by the internationally-funded Ebola response, leaving health centres and the regional hospital short of staff and financial support. The consequences can be deadly.

In four health facilities, Médecins Sans Frontières (MSF) is aiming to improve access to basic healthcare and reduce hospital infection risks in the midst of an active Ebola transmission zone.

The small clinic of Metale at first glance resembles an outpost rather than a health centre. The MSF team refitted the interior of the wooden building and it now houses consultation spaces, several beds for patients, a maternity unit, a pharmacy and a laboratory. In a small, weathered building next door, the old maternity unit with a simple wooden delivery table is still in use.

Driving to Metale is a long journey through the rural countryside of Mabalako, and through the active Ebola transmission zone. It is here, in the health zone of Mabalako, that the outbreak started back in August 2018. Close to 400 people have been confirmed with the Ebola virus in this zone alone, and over 300 have died.

We lost children in the paediatric ward because they were not put on the correct malaria treatment straight away - an error that could have been avoided with the right human resources and more vigilance. MSF doctor Brian Da Cruz

As rain sets in, people walking between villages along the road cover their heads with banana leaves, and the narrow dirt-track quickly turns into a mud bath.

"We have fitted a tank collecting rain water from gutters, installed new latrines, and built a disposal area with two secure tanks to safely dispose of medical waste or contaminated items," explains Isai Sanou, a water, sanitation and hygiene specialist with MSF.

The clean water and safe hygiene standards are key to preventing and controlling infectious diseases, including Ebola, but also benefit the maternity and laboratory services.

Health posts and health centres like the one in Metale are the core fabric of the Congolese health system. They are the first line of basic healthcare for people in need of medical advice or treatment. Common infectious diseases like malaria, measles or cholera are often diagnosed and treated here, and many centres have small maternity services or paediatric wards.

Patients with complications or severe injuries are referred to bigger health centres or to the general hospital in each health zone.

The system, however, has numerous gaps and is lacking resources and personnel. The internationally-supported Ebola response underway has made the situation worse.

There is no electricity in Metale, and no fridge to keep vaccines for much-needed routine vaccination activities against measles, diphtheria or tetanus. Several vaccination campaigns in North Kivu have been put on hold or delayed as attention and resources are diverted to the complex fight against Ebola.

For health centres and hospitals in the region, the scale-up of the internationally funded Ebola response can be a blessing or a curse.

But the health workers needed in the response are almost exclusively hired from other health centres and hospitals in the area, which are now facing critical staff shortages.

At the General Hospital in the main village of Mabalako, these gaps are strikingly evident. Over half of the doctors and nursing staff are missing, and no one has sufficient time to watch over patients in the four wards around the big courtyard.

As extra wages with the Ebola response tend to be higher and more reliable, many of the remaining staff are disappointed that they were not selected, and moral and motivation are low.

In the hospital, the staff shortages, unavailable treatments, and missing salaries are a deadly mix.

"We lost children in the paediatric ward because they were not put on the correct malaria treatment straight away - an error that could have been avoided with the right human resources and more vigilance," said MSF doctor Brian Da Cruz, who is supporting the two remaining doctors in charge of an operating theatre, maternity department, paediatric clinic, and a regular ward with more than 40 beds.

The hospital also has a basic isolation zone for patients with infectious diseases, but the small structure has no changing rooms, no decontamination zone, and there is no safe access for families to visit patients.

As suspect Ebola patients are taken to another, better equipped structure, its rooms are currently used to observe four children with measles, a vaccine-preventable, but highly infectious disease leading to regular epidemics in the DRC.

On the opposite side of the courtyard, MSF drilled a borehole and installed a water point, which is in permanent use by people living in the neighbourhood for clean drinking water.

While MSF's support was mostly focused on improving infrastructure and working alongside the remaining staff in health centres and the regional hospital, the team is currently evaluating a different model, including a regular payment scheme to supplement staff salaries and offer bedside training.

"We are discussing playing a stronger role in the hospital and the three health centres we support, by taking supervisory responsibility, offering training on the job, and ensuring patients have access to free care while staff are getting paid," explained MSF project coordinator Amandine Colin.

We train the local health promoters on key messages to prevent malaria, including instructions to cover stagnant water sources, use mosquito nets, and take children to the nearest health centres so they can be treated in time. Wivine Bokotogi, MSF community outreach specialist

Malaria is another major health burden at risk of being neglected as the attention and resources chase after the Ebola epidemic. In the DRC, malaria accounted for 13 per cent of deaths in children under five years old in 2016, and up to half of the people screened in Ebola treatment centres last year tested positive for malaria alone.

"We train the local health promoters on key messages to prevent malaria, including instructions to cover stagnant water sources, use mosquito nets, and take children to the nearest health centres so they can be treated in time," said Wivine.

Substantial resources and expertise are being deployed to end this second-largest Ebola epidemic. However, if more attention is not given to affordable, quality healthcare, the fight against Ebola threatens to throw a long and problematic shadow.