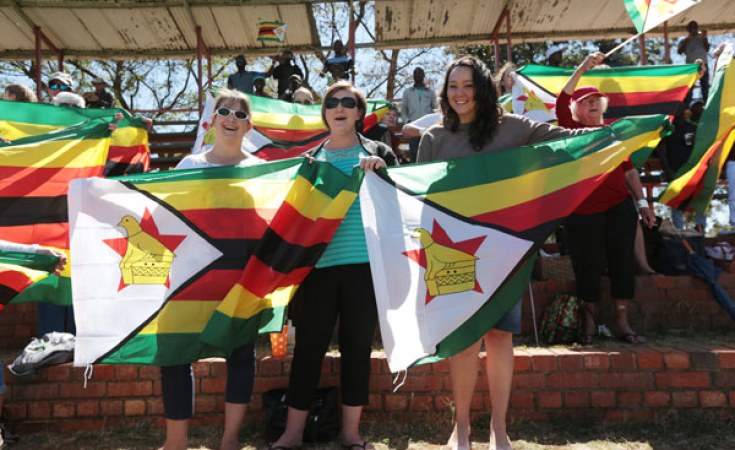 The United Arab Emirates, who provided the kiss of death for the Chevrons' quest for an appearance at this year's Cricket World Cup, could provide the setting for the injection of life for the domestic game on Monday in Dubai.

The UAE cricketers handed the Chevrons, who needed victory at Harare Sports Club in March last year to book a place at the 2019 World Cup in England and Wales, a shock three-run defeat.

That loss, before a shell-shocked capacity crowd of about 15 000 at Harare Sports Club, opened the door for Afghanistan who went on to beat Ireland, the next day, to secure their ticket to the World Cup.

Since then, Zimbabwean cricket has been in turmoil, with the decision by the game's leaders to sack coach Heath Streak and his entire staff triggered a lengthy and ugly boardroom battle.

But, that paled into insignificance compared to the suspension of Zimbabwe Cricket by the International Cricket Council at their annual conference in July.

The ICC leaders argued that the decision by the Sports Commission, to suspend the ZC board led by Tavengwa Mukuhlani, amounted to government interference.

All the funding that comes from the ICC was suspended while the Chevrons and Lady Chevrons were barred from taking part in the qualifiers for next year's ICC Twenty20 World Cup in Australia.

The ICC also warned that, should their concerns not be addressed by Tuesday this week, they were set to expel Zimbabwe from their membership.

However, the Sports Commission have since reinstated the Mukuhlani leadership, a key concern by the ICC, and the domestic sports fraternity, led by Sports Minister Kirsty Coventry, has been singing from the same hymn to ensure the country's Full Membership is restored.

Although Zimbabwe's fate will be decided on Monday, at the ICC board meeting in Dubai, what also happens in the boardrooms in the UAE from today to Monday, with those who support the lifting of this country's suspension, set to preach their story to those who matter.

Zimbabwe Cricket, because of the suspension, will not be represented in Monday's board meeting but Coventry and Sports Commission chairman, Gerald Mlotshwa, have been preaching the gospel aimed at getting that suspension lifted.

"Since the reinstatement of the Zimbabwe Cricket Board by the Sport and Recreation Commission (SRC), we have been in constant contact with the ICC who appear to have been impressed by the progress made in as far as fulfilling their requirements for the lifting of Zimbabwe's suspension," Zimbabwe Cricket Communications Manager, Darlington Majonga, told the ZBC this week.

"We are thus very confident that when they meet to decide on our fate on the 14th of October 2019, their decision will be favourable for us as a nation."

The ICC board will also be expected to deal with the issue of the Cricket Association of Nepal after the country held elections, three years after its suspension for breach of the global cricket governing body's regulations which prohibit government interference.

ICC deputy chairman, Imran Khwaja, had been leading the organisation's efforts aimed at getting Nepal back into the fold.

"We are delighted with the momentous developments in Kathmandu, which is the culmination of the ICC led governance reform process over the last three years and has resulted in a united cricket fraternity in Nepal," he said.

"My congratulations go out to all Nepal cricket stakeholders including the fans, players, administrators, as well as the Nepal Government and the National Sports Council on this historic milestone.

"With a newly elected Central Working Committee in place, I am optimistic that Nepal will replicate this progress off-the-field too.

"A major prerequisite for the reinstatement of Nepal's ICC membership has now been achieved and we will consider the next steps during the ICC Board meeting in Dubai."

Previous Story
Tagged:
Copyright © 2019 The Herald. All rights reserved. Distributed by AllAfrica Global Media (allAfrica.com). To contact the copyright holder directly for corrections — or for permission to republish or make other authorized use of this material, click here.