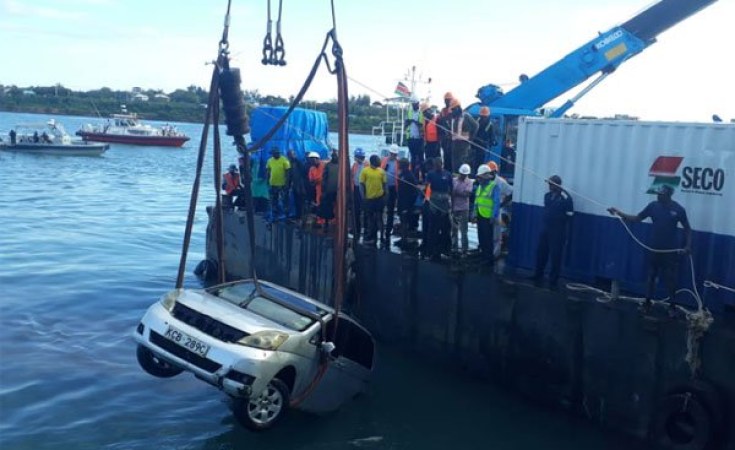 Karim Rajan/Daily Nation
The vehicle was pulled out at 4pm on Friday, October 11.
The Nation (Nairobi)
By Mohamed Ahmed and Anthony Kitimo

The 13-day recovery operation to retrieve the bodies of a woman and her daughter whose car slipped off the ramp of the ferry in Likoni Channel was not all rosy. Interviews with team members revealed intrigue and friction, which were blamed for the delays.

The bodies of Mariam Kighenda, 35, and Amanda Mutheu, 4, were pulled from the Indian Ocean on Friday afternoon.

The vehicle, which the victims were in when it slipped off MV Harambee on September 29, was found following efforts by a multi-agency team.

But an official in the multi-agency team involved in the operation told the Saturday Nation that the Kenya Navy was involved in the mission only for "the family to see that something was being done".

Kenya Navy divers would go into the water for a few minutes and come up as others circled in boats while the family waited eagerly, the Saturday Nation was told.

"It was when the family showed seriousness in getting private divers that the operation became serious," said the official.

Eight divers from South Africa joined the Kenya Navy on Tuesday in an effort to retrieve the vehicle and the bodies. They were contracted by the family after earlier efforts by local divers bore no fruit.

The family had earlier paid local divers Sh100,000 but they pulled out of the operation.

They hired five divers from SubSeas Services. The government reportedly brought in three others from South Africa despite assurances that the Kenya Navy was capable of the job.

During the operation, our source revealed, lack of cooperation between the Kenya Navy and other agencies stalled the operation.

Multiple sources revealed that at first no planning meetings were held.

"What we were going for was just like a breakfast meeting where we shared information on locations that we had found using our machines," said one of source, who spoke on condition of anonymity.

At no time did divers from the Kenya Navy, Kenya Ports Authority, Kenya Marine and Fisheries Research Institute and the county government plan the exercise together.

"The Kenya Navy was commanding everything, leaving out the others, and that's why Musa (a local diver) pulled out because he was frustrated," said our source.

Though the Kenya Navy lacked the appropriate equipment, "they wanted to be seen as the ones doing everything and did not want to recognise efforts by the other agencies, thus frustrating them," the source said.

Previous Story
Car That Sunk Into Indian Ocean With Mother and Daughter Retrieved
Next Story
Retrieval of Car, Bodies in Likoni Tragedy - As It Happened

Car That Sunk Into Indian Ocean With Mother and Daughter Retrieved

Retrieval of Car, Bodies in Likoni Tragedy - As It Happened

Kenya's Navy Put Through Its Paces to Boost Blue Economy
Tagged:
Copyright © 2019 The Nation. All rights reserved. Distributed by AllAfrica Global Media (allAfrica.com). To contact the copyright holder directly for corrections — or for permission to republish or make other authorized use of this material, click here.