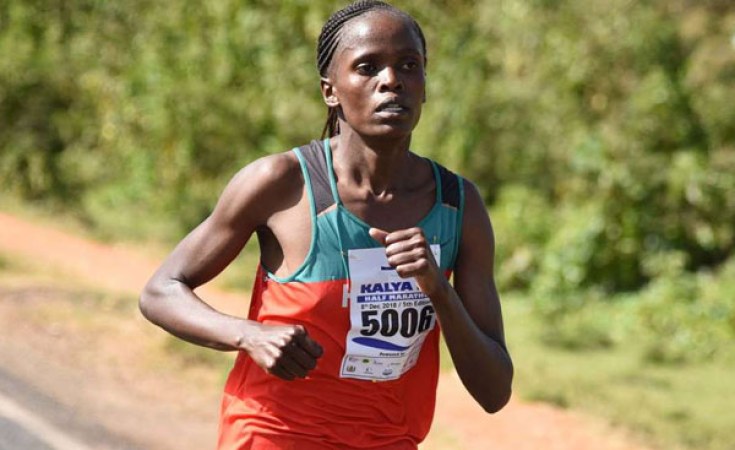 Jared Nyataya/Daily Nation
Brigid Kosgei on her way to victory during the Kalya Half Marathon in West Pokot County on December 08, 2018.
Capital FM (Nairobi)
By Timothy Olobulu

Kosgei led the race for most of the final half and dipped deep into her energy reserves in the final 2km to ensure she breaks the record, just a day after compatriot Eliud Kipchoge became the first man ever to run the men’s marathon in under two hours.

Meanwhile, Lawrence Cherono won the men’s race with a dip in the final few metres to cut the tape in 2:05:45, just one second ahead of Ethiopia’s Dejene Debela.

Ethiopia’s Ababel Yeshaneh was dragged through the section in a swift 15:36 with Gelete Burka a further 27 seconds in arrears.

Her pace dropped slightly after that initial enthusiasm but the 25-year-old settled into regular 16-minute splits for each five-kilometre segment.

Fewer than five kilometres later, her lead over Yeshaneh had grown to two minutes, reaching 25km in 1:19:33. As she continued to run behind two male pacemakers, Kosgei added another minute to her lead thanks to a 15:45 split between 25km and 30km.

The race was all about Kosgei’s world record attempt and she showed no signs of fading in the closing stages. The pace-makers peeled away before the final two miles as Kosgei forged on alone.

With about 20 seconds left of running, she couldn’t help but smile as she realised the magnitude of what she was about to achieve. Moments later, she crossed the line in 2:14:04 to take 81 seconds off the longest-standing marathon world record – men’s or women’s – in the post-war era.

“I’m happy and I feel good,” said Kosgei. “I ran here last year so I knew it was a good course. There was a little bit of wind but it was okay. People were cheering all along the course, which gave me more energy.”

“We always knew the time would come when the record would be broken,” said Radcliffe, who was in Chicago and congratulated Kosgei when she finished. “When I saw how fast Brigid was running in the first half of the race, I knew she had a good chance of getting the record.

“I’ve always said 17 is my lucky number and it was exactly 17 years ago to the day that I set my first world record here in Chicago.”

Ethiopian, Kenyan Athletes Smash Half Marathon World Record
Tagged:
Copyright © 2019 Capital FM. All rights reserved. Distributed by AllAfrica Global Media (allAfrica.com). To contact the copyright holder directly for corrections — or for permission to republish or make other authorized use of this material, click here.