Mozambique: Mozambicans Head to Polls Tuesday Amid Fears of Violence 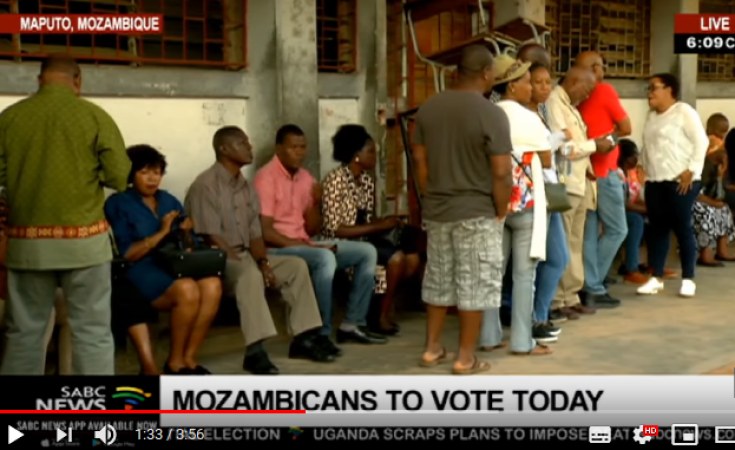 Pemba — Mozambicans will choose their next president at the polls Tuesday after a 45-day election campaign marred by violence.

Voters will decide whether to support Filipe Nyusi, candidate for Frelimo, the ruling party that has held power since Mozambique gained independence from Portugal in 1975. The party has been widely criticized for its alleged role in numerous corruption scandals, including the $2 billion "hidden debts" scandal that has created an economic crisis in the southern African country.

The main opposition candidate is Ossufo Momade, leader of the Renamo party, running on a platform of fighting corruption. The two others are Daviz Simango, of the Democratic Movement of Mozambique, and Mário Albino, a political newcomer.

Voters also will choose provincial governors and 247 members of Parliament.

No polling has been done on the presidential race, but analysts predict a close contest between Frelimo and Renamo. Some give the edge to Frelimo, which they say has run a better campaign and has control over electoral bodies.

An estimated 13 million of the country's 30 million people are eligible to cast ballots. But, while police have guaranteed safety at the polls, some are fearful of what might happen Tuesday and in the following days.

At least 40 people have been killed in the election cycle to date. The victims included Anastácio Matavele, an election observer who was killed Oct. 7 in the southern city of Xai Xai after openly criticizing the ruling party.

Also, 10 of the designated 1,860 polling stations in the northern province of Cabo Delgado will be closed, affecting at least 5,400 voters, the National Election Commission announced Sunday. The commission attributed the closings to security concerns in the area, where an insurgency has killed at least 200 people since 2017.

Cassamo Camal, the election commission's provincial director in Cabo Delgado, assured "the logistical conditions for the disposal and placement of the material and members of polling stations and security men."

There are also complaints in the provinces of Gaza, Nampula and Zambézia that electoral bodies are delaying the registration of observers.

Opposition parties say Frelimo intends to manipulate the vote. They have urged members to maintain watch at the polls, while respecting a legal perimeter, to safeguard against fraudulent ballots.

Camal, the Cabo Delgado election director, said his office would do its utmost to "ensure results are disseminated as quickly as possible" to reduce "conflict and distrust."

Vote Counting Marred by Allegations of Rigging in Mozambique
Tagged:
Copyright © 2019 Voice of America. All rights reserved. Distributed by AllAfrica Global Media (allAfrica.com). To contact the copyright holder directly for corrections — or for permission to republish or make other authorized use of this material, click here.