South Africa: Get More Bang for Your Buck By Investing in Africa 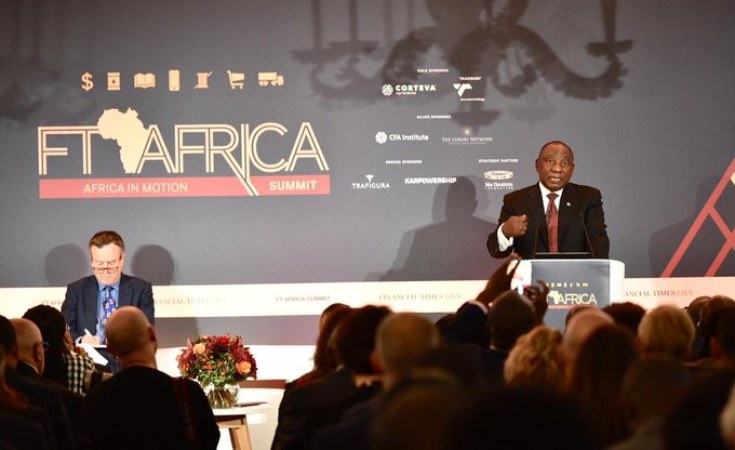 Africa is ready for the great leap frog of attracting investment, displaying its innovative talent and capability and catapulting itself to greater heights of human development.

These were the words of President Cyril Ramaphosa when he delivered the keynote speech at the Financial Times Africa Summit 2019 in London on Monday.

The Summit, which has built a reputation for attracting key decision-makers, financiers, investors and development partners from Africa and across the world, provides a platform to discuss potential for scaling up investment and trade with and within the African continent.

"Africa is ready to partner with investors and the private sector because its been proven many times over and in numerous countries that discerning investors who have the foresight to invest in Africa can earn good returns.

"We have reached a moment in our history where Africa needs investment more than it needs foreign aid," said President Ramaphosa.

This year's Summit comes as Africa begins the countdown to the launch of the African Continental Free Trade Area.

The treaty brings together into a single market 54 nations of some 1.2 billion people and a combined GDP of over $3 trillion.

By some estimates the new free trade area could increase the value of intra-African trade by 15% to 25% by 2040.

In addition to its economic impact, the African Continental Free Trade Area (AfCFTA) will have far-reaching political, social, physical and international effects.

On the economic front, it will improve access to existing markets and lead to the creation of new ones. This, President Ramaphosa said will ensure investors who bank on Africa will reap the rewards.

The free flow of goods and services will enable African businesses and entrepreneurs to expand their horizons. It will lead to the creation of a huge number of both big and small businesses.

This treaty will unleash the manufacturing and industrial capability of the continent as companies will seek to make products for the burgeoning African market.

The removal of trade barriers will lower prices and benefit consumers. Business costs will be reduced and business efficiency will be raised.

"The convergence of economies and the integration of markets under the AfCFTA will make the case for investing in the African continent even stronger.

"This is a continent with abundant natural resources such as minerals, oil and natural gas, but also vast tracts of arable land and water, as well as wind and sunshine - the drivers of the renewable energy revolution," said President Ramaphosa.

The African Development Bank estimates that Africa's infrastructure needs amount to some $130 billion to $170 billion a year.

For its part, South Africa is in the process of setting up an Infrastructure Fund to leverage investments from financial institutions, multilateral development banks, asset managers and commercial banks.

Further making the case for investment in Africa, President Ramaphosa said with the global move towards cleaner energy sources, Africa is perfectly situated for investment in wind, solar, bioenergy, hydro and natural gas.

"Africa's success will lie in collaboration, in cooperation and in partnerships for mutual benefit.

"It also depends on African countries working to advance the interests of their people, seeking African solutions to African problems. Africa wants to deal with the rest of the world on its own terms," said the President.

South Africa Reaches Out to Investors Ahead of Summit

ArcelorMittal Saldanha Closure the Death of Industrial Dreams?
Tagged:
Copyright © 2019 SAnews.gov.za. All rights reserved. Distributed by AllAfrica Global Media (allAfrica.com). To contact the copyright holder directly for corrections — or for permission to republish or make other authorized use of this material, click here.