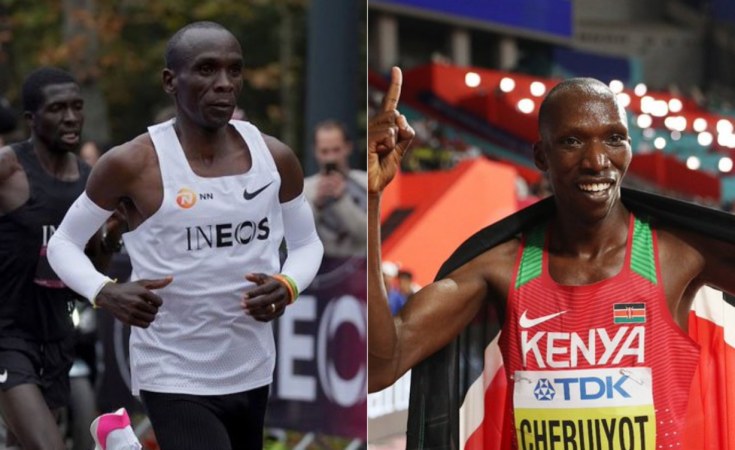 Kipchoge and Cheruiyot are part of 11 nominees released by world athletics governing body, IAAF, for the annual award which will be decided on November 23 in Monaco, France.

Kipchoge, who won last year's award after setting the world record in Berlin, is a huge favourite to retain the gong following his impressive time of 1:59:40 that saw him break the two-hour marathon barrier on Saturday in Vienna, Austria. In addition, he won the London Marathon in April a course record time of 2:02:37.

On the other hand, Cheruiyot led from gun to tape to claim 1500m gold during the recently concluded World Championships in Doha, Qatar. He also bagged 1500m Diamond League title besides winning 10 of his 11 outdoor races across all distances.

While Brazier and Lyles won Diamond League titles in their respective races, Coleman is the fastest man over 100m this year.

A three-way voting process will determine the finalists.

The IAAF Council and the IAAF Family will cast their votes by email, while fans can vote online via IAAF's social media platforms.

Voting for the Male World Athlete of the Year closes on November 4. At the conclusion of the voting process, five men and five women finalists will be announced by IAAF.

The male and female World Athletes of the Year will be announced live on stage at the World Athletics Awards 2019 on November 23.

Kipchoge, Cheruiyot Named Among IAAF Athletes of the Year Nominees

Kenya Honours Athlete Kipchoge As It Celebrates Its Heroes
Tagged:
Copyright © 2019 The Nation. All rights reserved. Distributed by AllAfrica Global Media (allAfrica.com). To contact the copyright holder directly for corrections — or for permission to republish or make other authorized use of this material, click here.