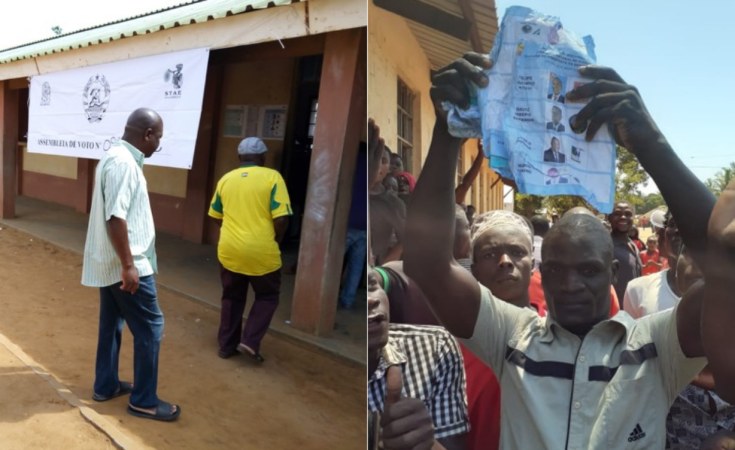 Polling opened normally across the country, with few problems. But turnout is very mixed with low turnout in some areas and high turnout elsewhere, particularly in Nampula, Zambezia, Niassa and Sofala. Queues of over 400 per polling stations were reported in Mecuburi, Nampula.

Bilene (Gaza), Massinga (Inhambane) and Maputo City (Bagamoyo) there were no voters at some polling stations.

There were several reports of people with additional ballot papers marked for Frelimo trying to stuff the ballot boxes. The photo below is from Eduardo Mondlane school in Angoche, Nampula.

Our correspondents have been blocked for entering polling stations in two places in Gaza, but there are no reports of problems elsewhere. Some polling stations did not open on time in Zambezia (where voting materials were still being distributed in Quelimane this morning) and a few in Maputo city and province.

Most Polling Stations Open On Time - Incidents of Fraud Reported

Vote Counting Marred by Allegations of Rigging in Mozambique
Tagged:
Copyright © 2019 Mozambique News Reports And Clippings. All rights reserved. Distributed by AllAfrica Global Media (allAfrica.com). To contact the copyright holder directly for corrections — or for permission to republish or make other authorized use of this material, click here.