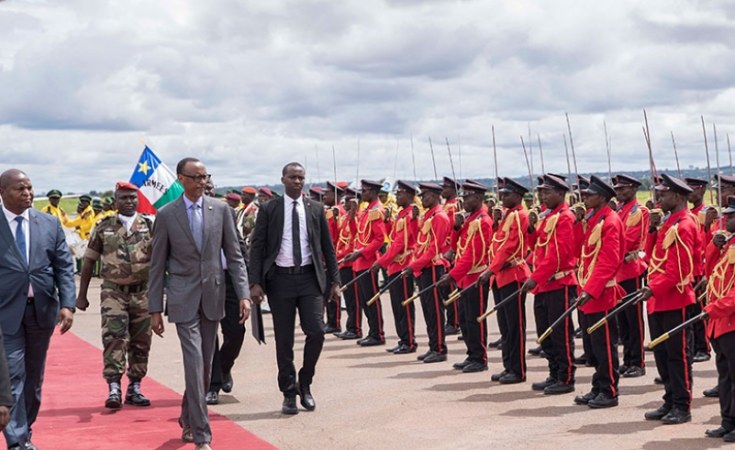 The agreements are expected to increase partnership and cooperation between the two nations, particularly in areas of defence, mining and oil, investment promotion as well as a bilateral investment treaty.

President Kagame was in Bangui on a one day state visit to Central Africa Republic on the invitation of President Touadéra.

While in Bangui, Kagame was awarded the Grand Croix de la Reconnaissance as well as the key of the City of Bangui - symbolism for honorary resident.

The signing of the pacts, Kagame said, was an indication of a new chapter in bilateral ties between the two countries.

"Today, we signed a number of important agreements which put our joint endeavours on solid footing. And this is just the beginning. These agreements should be diligently implemented, so we can build on them to achieve even more together, in the years ahead," he said.

With both countries having undergone difficult histories, the President noted that no nation is a hostage to its past.

"There is always a choice that can be made, collectively, to build a future, in which every citizen has a sense of dignity and belonging," he said.

Sharing lessons from Rwanda's peacebuilding process, the president told CAR leaders that Rwanda's key factors for success was the commitment to national unity.

"We endeavour to find solutions to our problems through dialogue and consensus. Politics should bring people together to promote the well-being of everyone, not create divisions," he said.

Kagame said that Rwanda is a firm believer in intra-African cooperation, describing the country as a work in progress.

"We believe deeply in the effectiveness of intra-African cooperation. The ideas and resources we need can be found right here on our continent," he said.

The President also pledged Rwanda's sustained support to CAR as it strives to recover from years of political instability.

"Rwandans were supported on our journey by our brothers and sisters in Africa, and beyond. It is, therefore, an honour for our country to be able to share whatever we have and our experiences, wherever useful." he said. "We also seek to learn from the efforts of others, including the Central African Republic."

In a small but significant way, he added, this kind of practical cooperation gives meaning to the tragedy we went through.

"Rwanda stands ready to continue accompanying the people of the Central African Republic, as you move forward," Kagame said.

Currently, the country maintains 1,370 troops and 430 police personnel who are deployed in various sectors.