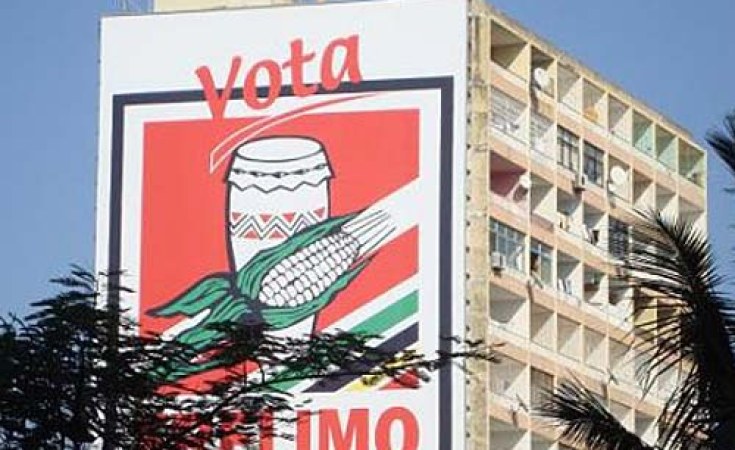 Frelimo and its presidential candidate Filipe Nyusi appear to be on course for victory. Severe restrictions on observation and the failure to post polling station results in places where the opposition is expected to win make it impossible to forecast percentages. But partial and initial reports give Frelimo a large margin. In three key provinces for the opposition - Nampula, Tete and Zambezia - available results are not sufficient to predict. In Sofala, it appears that MDM and Renamo will split the opposition vote and give victory to Frelimo. In the remaining seven provinces the Frelimo victory seems highly likely.

A few polling stations were still counting votes late this afternoon. District elections commissions are still receiving materials from polling stations and most have not started counting. The district results must be announced by Friday.

Initial reports suggest a turnout of about 50%.

Initial reports show a significant number of polling stations where 100% voted and they voted overwhelmingly for Frelimo presidential candidate Filipe Nyusi. As well as the 100%, there is a similar large group where 90% to 100% voted, again overwhelmingly for Nyusi. This must be ballot box stuffing.

As in the past, this has occurred mainly in Gaza, but there is also significant ballot box stuffing in Cabo Delgado, Nampula and Tete. One school in Maputo city also reported 100% turnout.

And in Gaza the ghosts are taking sides.  In polling station 092012-02, all 800 registered voters cast their ballots, of whom 799 voted for Nyusi, 1 for Momade and no ballots were blank or spoiled. In another polling station, no ghosts voted and only 17 staff and observers. And in some polling stations, only 200 of 800 registered people voted, which is highly unusual for Gaza. It does appear that the publicity did frighten many of ghosts into not voting. There were 300,000 more voters registered in Gaza than the census said there were voting age adults, and these "ghosts" seem in many cases to have had their own polling stations or a large part of a polling station. Some were able to vote, but many did not.

In Chinde district, Zambezia, the president of polling station 1 at EPC Filipe Samuel Magaia was arrested after being surprised invalidating Renamo votes by adding a fingerprint to make it look like people had voted for two candidates. Angelo Moniz had dyed his hair and used the die to invalidate Renamo's votes, but was caught by Renamo delegates (poll watchers). Moniz was detained by police but released hours later.

On average, invalid votes are about 3% of the total, but initial results show there are polling stations with 10% up to 32% invalid votes, which are probably ballot papers for the opposition which have been intentionally spoiled. This has occurred in many provinces, particularly Niassa, Nampula and Zambezia.

Zambezia STAE was unable to accredit more than 1000 independent observers, but many credentials were issued for a Frelimo “observer” group, the National Youth Council (Conselho Nacional da Juventude, CNJ). But our correspondents reports that CNJ abused observer's special voting rights In Zambezia to vote several times at different polling stations. Cases have been reported in Mopeia and Inhassunge districts.

In Mopeia, close to 300 CNJ observers were transported to the polling centres in groups by Frelimo's first secretary, including in a vehicle with AEG 125 MP number plate. The "observers" voted in primary schools 8 March, 16 June and Sede, our correspondents report. “Observers walked in groups of 10 to 20 at each polling centre and went to each table to vote,” our correspondent said this morning.

In the Inhassunge district of Zambezia, observers from the CNJ and local churches accredited by the District Election Commission (CDE) used the special vote right to vote for Frelimo several times, the Renamo delegate told our correspondents. Among the observers was a police officer and former police spokesman in Zambezia, Jacinto Felix.

The "observers" voted at three polling stations (042787-06B, 042787-04, 042787-05) at Eduardo Mondlane School in Inhassunge with the permission of the polling station staff and were transported in a Frelimo vehicle with registration AGA-493-MC to Mussama locality about 10 km from Inhassunge to vote again.

A polling station, including ballot boxes, was apparently set on fire last night in Ilha da Inharingue, Machanga, Sofala, STAE Provincial Director Jorge Donquene told reporters today in Beira. But the event remains confused. A police statement issued today in Maputo said that "around 300 Renamo members and supporters vandalized the school and tried unsuccessfully, thanks to the police's prompt intervention, to seize 9 ballot boxes." The statement added that five houses of traditional construction were burned, and  precarious construction nine people were arrested.

But our correspondents tell a different story. They say people stormed and set fire to the home of Frelimo's first secretary and of a teacher, claiming they were hiding ballot boxes with pre-marked Frelimo ballot papers.

Observers were intimidated and evicted from polling stations in Gaza and Nampula, the Civil Society Learning Centre (CESC) reported this afternoon.

In Gaza "the counting of votes in almost all polling stations was marked by the intimidation and expulsion of opposition party observers and delegates from the polling stations by STAE technicians and polices. Ten CESC observers were expelled from their polling stations and prevented from observing the vote count, and a further two were threatened with death."

In Nampula, "CESC observers were intimidated and threatened and even prevented from doing their observational work by STAE-related people and observers from AMULTSDS, an organization that emerged surprisingly in these elections and is linked to the Frelimo party. At certain polling stations, such as EPC Maria da Luz Guebuza, police have prohibited observers from taking pictures of the results (editais) posted outside the classroom" used as the polling station.

In the face of growing allegations of electoral fraud that may have contributed to Frelimo's probable victory, the party's secretary general, Roque Silva, called on the press today to urge Mozambicans to look forward to the results with calm. "We wanted to urge all Mozambicans to continue serenely until the relevant bodies make public the official results. And that these should not be seen as a gain for one party but the victory of all Mozambicans,” said Roque Silva in a statement to the press that did not allow journalist questions.

Campaign Shows That Political Tectonic Plates Are Shifting in Mozambique

Frelimo Appears Headed for Landslide Victory in Mozambique Polls
Tagged:
Copyright © 2019 Mozambique Political Process Bulletin. All rights reserved. Distributed by AllAfrica Global Media (allAfrica.com). To contact the copyright holder directly for corrections — or for permission to republish or make other authorized use of this material, click here.