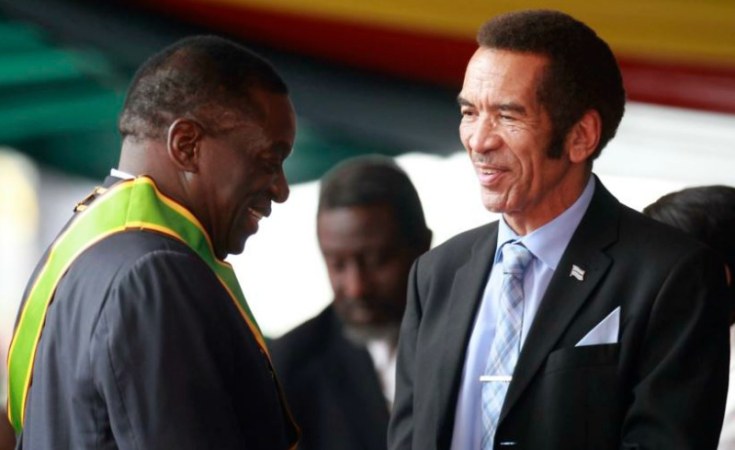 Former Botswana President Ian Khama may have handed over the reins to Mokgweetsi Masisi 18 months ago, but when Batswana go to the polls on October 23, he will controversially have a say.

Mr Khama has been canvassing for his new party the Botswana Patriotic Front (BPF) and the opposition coalition Umbrella for Democratic Change (UDC) after quitting the ruling Botswana Democratic Party (BDP) earlier this year.

And for the first time in 53 years, the BDP trudges into an election uncertain of an outright win, thanks to the Khama factor.

The BDP has won every election in Botswana since independence in 1966.

But this time, their former leader, Mr Khama, who turned his back on the party formed by his father, Sir Seretse Khama, is a crucial ally of the opposition.

Mr Khama fell out with incumbent President Masisi just a few months after handing over the reins. Subsequently, his brother, Tshekedi, quit his ministerial position and the party to join BPF.

"It's unprecedented. The BDP have two sons of its founder fighting from the opposition corner. It is a double-edged sword for them considering you have voters who loathed Mr Khama's two terms in office," said a political analyst, Mandla Mzimela.

The feud has overshadowed other issues in Botswana like recovery from drought, mining sector reforms, human wildlife conflict, corruption and unemployment.

The Khamas are respected in the central district of Botswana. They hail from a town called Serowe. Their new party, headed by former BDP legislator Biggie Butale, is projected to win all 14 parliamentary seats in the central district. If this happens, it would increase the odds of the main opposition coalition - the three-party Umbrella for Democratic Change (UDC)--snatching power from BDP.

Mr Butale has previously told The EastAfrican that "if there is no outright winner we would be willing to join forces with the UDC to unseat the BDP".

However, Mr Mzimela warns accepting the support of Mr Khama, who they strongly condemned during his presidency, has put the party's credibility under scrutiny.

"You will have voters that will punish the UDC for going to bed with the same man they accused of killing one of the leaders who formed the coalition UDC, Gomolemo Motswaledi," he said.

"I remember UDC president Duma Boko crying in front of the media, saying the former President Ian Khama and others have killed Motswaledi. They are now walking together. Now the question is who do they want to kill?"

Mr Saleshando defended the move to work with Mr Khama, saying while they differed with him, they would not turn down his support.

"He is harming the BDP's electoral chances and we celebrate that unashamedly. If Khama tells people 'go and vote UDC' who am I to say 'don't vote the UDC'? You don't have to share the values espoused by someone to accept their vote Mr Saleshando said.

He, however, said if they win next Wednesday's election they would call those who were in government with Mr Khama to account.

The UDC has been hoping to build on its gains in the 2014 election when it won 17 out of 57 seats, a result that was seen as a protest against Mr Khama's autocratic rule.

Botswana's National Assembly has 57 MPs elected in single-member constituencies and the winning party needs to garner half of those to run government.

Masisi Declared Winner of Botswana Election
Tagged:
Copyright © 2019 The East African. All rights reserved. Distributed by AllAfrica Global Media (allAfrica.com). To contact the copyright holder directly for corrections — or for permission to republish or make other authorized use of this material, click here.

Djibouti Looks to Ethiopia to Gauge Its Economic Future
Travel