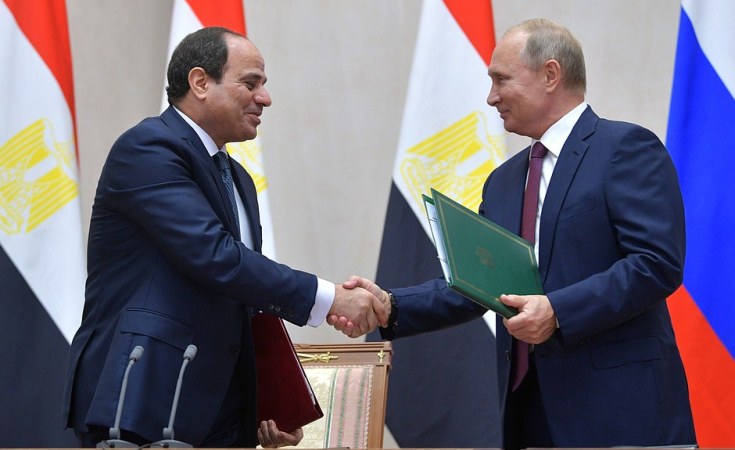 President of Russia
Russian leader Vladimir Putin and Egyptian president Abdel Fattah el-Sisi signed the Agreement on Comprehensive Partnership and Strategic Cooperation between the Russian Federation and the Arab Republic of Egypt in 2018.
The East African (Nairobi)
By Peter Munaita

In picking to mediate between Egypt and Ethiopia over the latest row over the filling up of the latter's $4 billion Grand Ethiopian Renaissance Dam (GERD), Russia has taken on what could be one of its trickiest diplomatic forays yet.

Despite Moscow being the prime mover of three globally sensitive peace negotiations in Syria, Serbia-Kosovo and Afghanistan, this will be its first foray into what is technically not a political or military showdown.

It is a resource war which the Nile Basin Initiative--of 11 Nile riparian countries in eastern Africa--have so far preferred to handle regionally with the support of the World Bank.

The Russian Federation and the Soviet Union before it have had a bad experience in mediating conflicts in the Horn of Africa, the most notable being the border dispute between Ethiopia and Eritrea before quietly letting the Us take the lead.

That dispute was seismically concluded last year with Prime Minister Abiy Ahmed, 43, signing a peace agreement with Eritrean President Isaias Afwerki, 77, that earned the former the $934,000-worth Nobel Peace Prize on October 10 this year.

Despite the odds Russia President Vladimir Putin has placed diplomacy as the third pillar of the federation's foreign relations after counting on military ties to spread its influence across the world for ages.

While Mr Putin may want to get broader regional input during the talks in Sochi on the sidelines of the Russia-Africa Summit, he has already won the confidence of Mr Abiy and Egypt's President Fattah al-Sisi.

Matters came to a boil two weeks ago during routine technical consultations in Khartoum, Sudan, over the filling of the dam, which is about 80 per cent complete and will produce 6,400 megawatts of electricity.

Egypt and Ethiopia failed to agree on the filling period with both countries accusing each other of being rigid in their conditions.

Mr al-Sisi said Ethiopia wanted to stick to a six-year filling plan that would constrain water flows to Egypt. Mr Abiy countered that Egypt had unilaterally gone back on issues that had been agreed upon and wanted the matter handled politically including with a mediator. Mr Abiy accused Egypt of adopting lone ranger tactics.

When Ethiopia started constructing the dam in 2013, it had planned to fill the dam in three years but it lengthened the period to between six and seven years. Egypt's wish has always been the dam to be filled in 15 years in order to avoid detrimental impact downstream.

Egypt's fears arise from the Nile having the weakest flow compared with rivers like the Amazon and the Congo. It is erratic in water volumes because of having to pass through the Sahara Desert and fears that Egypt will be water scarce from 2025.

The Nile Basin Initiative which has managed to tone down war talk over the river's exploitation has asked riparian countries to focus on the most beneficial use rather than the amount of water reaching each territory.

The Nile contributes 90 per cent of Egypt's fresh water and 95 per cent of its economic activities. In asking for GERD to be filled over a longer period, Egypt hopes to put in place programmes to alleviate its dependence on the Nile while Ethiopia argues that it needs to realise value from GERD as quickly as possible in terms of spurring economic growth.

If Putin midwives a middle path, Moscow will take just more than plaudits. It has vast interests in the Horn of Africa after signing a $3.5 billion arms deal with Cairo.

Geopolitical Stakes High at First Russia-Africa Summit
Tagged:
Copyright © 2019 The East African. All rights reserved. Distributed by AllAfrica Global Media (allAfrica.com). To contact the copyright holder directly for corrections — or for permission to republish or make other authorized use of this material, click here.

If He Hits You, He Loves You - Zimbabwe Tackles Myths & Violence
U.S., Canada and Africa