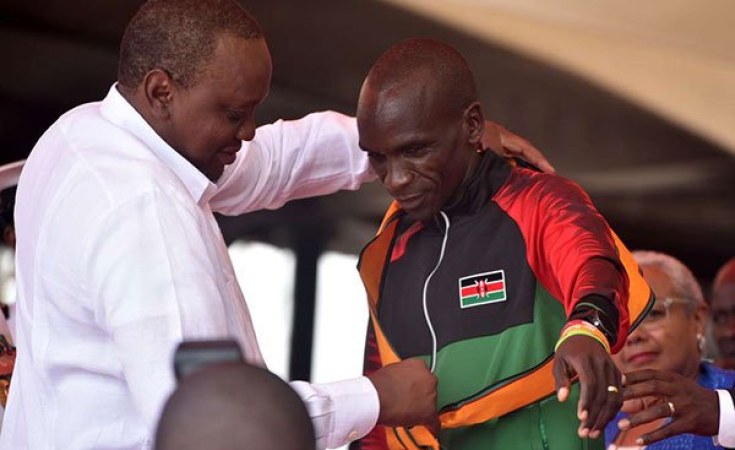 Kevin Odit/Nation Media Group
Kenya's Eliud Kipchoge, right, is awarded the Presidential Honour of Elder of the Order of the Golden Heart of Kenya by President Uhuru Kenyatta during Mashujaa Day Celebrations at Mama Ngina Waterfront Park in Mombasa on October 20, 2019.
The Nation (Nairobi)

President Uhuru Kenyatta has awarded Eliud Kipchoge the Elder of the Order of the Golden Heart of Kenya (E.G.H.) award during the national Mashujaa Day celebrations in Mombasa.

Kipchoge, who became the first man to run a full marathon under two hours on October 12 during the "INEOS 1:59 Challenge", is the first Kenyan sports personality to receive the award. In his address to the country, Uhuru urged Kenyans to emulate the world marathon record holder.

"His latest conquest shows that through integrity, hard work and commitment to excellence we can achieve all we set our minds to do. I urge all Kenyans to follow Kipchoge's example and become Shujaas in their respective fields," said Uhuru.

The presidential award caps what has been a fantastic year for Kipchoge who won the London Marathon in April in a new course record time of two hours, two minutes and 37 seconds before busting the two-hour marathon barrier in Vienna, Austria by clocking 1:59:40 during the "INEOS 1:59 Challenge".

IAAF Shortlists Kenya’s Kipchoge For Athlete of the Year Award
Tagged:
Copyright © 2019 The Nation. All rights reserved. Distributed by AllAfrica Global Media (allAfrica.com). To contact the copyright holder directly for corrections — or for permission to republish or make other authorized use of this material, click here.