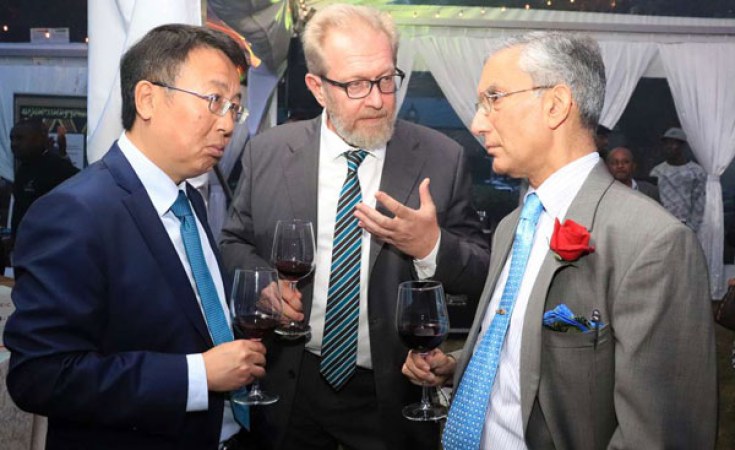 Jeff Angote/Nation Media Group
Chinese Ambassador to Kenya Wu Peng, his Russian Federation counterpart Dmitry Maksimychev and High Commissioner of India to Kenya Rahul Chhabra during Africa Day celebrations at the Ethiopian Embassy in Nairobi on May 25, 2019.
The Nation (Nairobi)
By Aggrey Mutambo

Ahead of the Russia-Africa Summit in Sochi on October 23-24, Russia's ambassador to Kenya, Dmitri Maksimychev, spoke to Aggrey Mutambo on a range of issues

Why is Russia hosting this summit?

The first ever Russia-Africa Summit will symbolise a new stage of the development of our traditionally friendly relations.

Russia and African countries are going through a period of rapid growth and technological advances.

The political role of Africa on world affairs is rising. Africa is the continent of the future. The decision to have a summit came naturally because it reflects the desire to expand and enhance co-operation for the benefit of our people.

This historic meeting will open opportunities, build partnerships and identify new areas and forms of co-operation.

Russia has been relating with post-independence African countries mostly through political ideology and scholarships. What is the current focus of relations?

It is true my country invested substantial efforts and resources in helping Africa liberate itself and strengthen the economic and political foundations.

The assistance we provided was not limited to training and education. It was the Soviet Union which gave the financial, technological and intellectual resources to build Jaramogi Oginga Odinga Teaching and Referral Hospital.

Speaking of scholarships, we believe it is one of the most strategic areas of development co-operation. And especially now, when only countries that keep up with the rapid technological progress can compete in the global economy.

That is why we have provided scholarships and other opportunities for young talented Kenyans to receive quality training and education in the best Russian universities. This year, 70 Kenyans have gone to Russia to study.

Russia's contribution to Kenya's sustainable development has been significant. Thousands of engineers, doctors and lawyers have been trained. They now serve their country. And we will expand that.

We are open to ideas of co-operation that meet the needs of Africans and Russians. It has always been that way.

Russia-Kenya trade, and indeed, trade with most African countries, has been relatively low. What programmes is your government undertaking to improve on this?

I respectfully disagree with this statement. Our trade is not that low. In the past few years, the volume of Russia's annual trade with Kenya fluctuated around $300 to $400 million. Kenya is our third or fourth (depending on the year) largest trading partner in Sub-Sahara. Russia is among the top buyers of Kenyan tea.

Of course, there is room for improvement. The summit in Sochi that will be preceded by an Economic Forum is aimed at finding new ways of increasing co-operation, including trade.

In a market economy, you cannot just make someone trade with another. You have to provide opportunities and facilitate contacts. I hope the Economic Forum will do that. We expect it to generate new contracts and agreements.

Apart from that, we, together with the Kenyan Government, are finalising an intergovernmental agreement on the establishment of an Intergovernmental Commission for Economic and Technological Cooperation that will create a framework and platform for systematic dialogue between Russian and Kenyan government agencies, businesses and economic operators.

Russian officials have said before that Moscow will borrow a leaf from China in engaging with Africa. What changes do we expect in Russia-Kenya relations?

As I said, the development of our co-operation with Africa is based on a long history of friendship and support.

It is a natural process dictated by mutual interest and desire to better serve the needs of our people in achieving sustainable development.

Our friendship with Kenya has stood the test of time and we are deeply grateful to the Kenyan Government for its support and co-operation. Of course, there is a need for further progress, and what you can expect is the expansion of co-operation in all fields using the best relevant experience that is available.

What kind of projects is your government targeting to be involved in Kenya specifically, and Africa in general?

In Kenya and Africa as a whole, we target those areas we have experience and expertise.

We hope to see specific proposals from the Kenyan side.

Our co-operation with Africa is comprehensive and mutually beneficial. We have never viewed our relations with the continent from the perspective of competition, let alone confrontation. What we want is harmonious co-operation.

The illegitimate and illegal unilateral restrictive measures initiated by some have nothing to do with our long-standing strategic friendship with Africa.

Buhari, Putin Agree to Fast-Track Nigeria-Russia Ties
Tagged:
Copyright © 2019 The Nation. All rights reserved. Distributed by AllAfrica Global Media (allAfrica.com). To contact the copyright holder directly for corrections — or for permission to republish or make other authorized use of this material, click here.