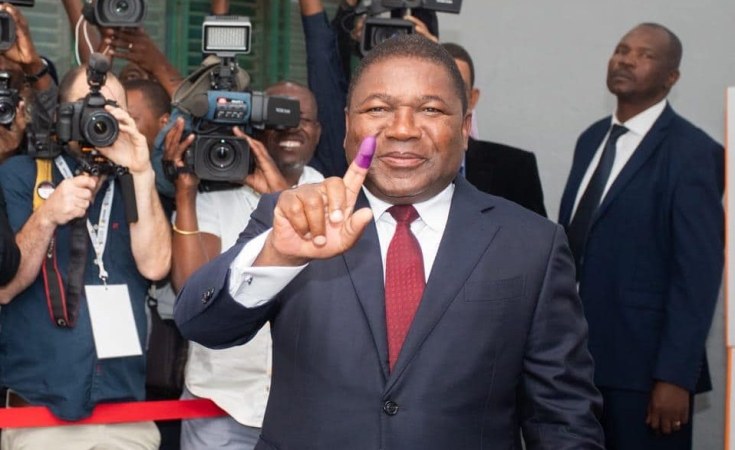 As more results become available, Frelimo's landslide victory is confirmed. Based on a sample of nearly 3000 polling stations, projections now indicate Filipe Nyusi (Frelimo) has won 71% of the vote. Ossufo Momade (Renamo) is projected to have won only 21% of the vote, Daviz Simango (MDM) 7%, and Mario Albino (Amusi) less than 1%.

Attempts to block independent observation in Zambezia were successful, and there are big gaps in the parallel count for Zambezia. Thus these projected totals could still change by small amounts.

The projections so far confirm that Frelimo is likely to win 9 governorships, with Zambezia still indoubt.

Turnout was 52%, just above the 49% of 2014. Officially this is the highest turnout since 1999, but has been inflated by ghost voters in Gaza. Nyusi is only just below the highest result for Frelimo, Armando Guebuza in 2009 with 75%.

"We saw a total violence characterised by the blocking and expulsion of Renamo party delegates (poll watchers, scrutineers) and party nominated polling station staff by polling station heads with the help of the police, and the arrest of delegates and voters when they tried to protest against ballot box stuffing," said Renamo secretary-general André Magibire at a press conference this morning (19 Oct).

The shows Frelimo does not want peace and violated the August peace accord. Article 3 of the Accord says the parties (Renamo and government) "will not practice acts of violence and intimidation for political objectives."

"The magnitude of the fraud" was so great that the elections cannot be accepted. They must be annulled and run again, he said.

In response to questions, Magibire said that what happens now will be decided by a meeting of the Renamo political commission to be held shortly. It is believed that the meeting is also likely to discuss the position of Ossufo Momande as president of Renamo and a possible November party congress.

Next Story
Tagged:
Copyright © 2019 Mozambique Political Process Bulletin. All rights reserved. Distributed by AllAfrica Global Media (allAfrica.com). To contact the copyright holder directly for corrections — or for permission to republish or make other authorized use of this material, click here.