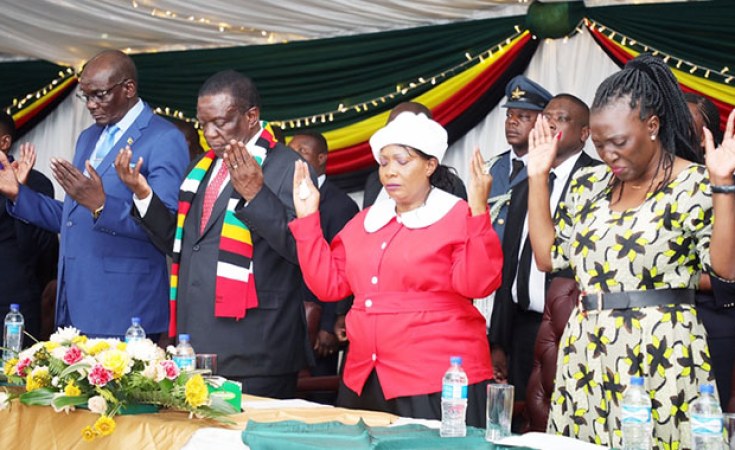 President Mnangagwa yesterday adjourned a rescheduled Cabinet meeting to attend the launch of the National Day of Prayer at State House where he urged churches to pray for peace and unity.

Most Cabinet ministers also attended the launch of the National Day of Prayer, which is the brainchild of First Lady Auxillia Mnangagwa.

Over 300 denominations were represented at the launch that was attended by over 1 000 people.

"We have gathered here at State House not to celebrate the First Family, but to pray to God about the challenges we are facing because He is the only one who can solve them. When I was inaugurated as President last year, I preached for there to be peace, love, unity and harmony in the country and that is what I still preach today when I get the chance," said President Mnangagwa.

"We want peace, love, harmony and a united country. We should not discriminate against each other. I also know that these are the virtues that are also promoted by the Church."

The President said Government would adhere to the dictates of the Constitution that guarantees freedom of religion.

He said churches have their right to worship freely and Government respects that provision because if a nation follows Jesus Christ's teachings, there will be no killing of each other and damaging other people's property.

President Mnangagwa said God was the one who appointed leaders, and the leaders should know that the people they lead belong to God.

"However, God does not come to directly appoint individuals as leaders but appoints them through the people.

"We have different races across the world and each one of them was given their own country and resources. However, we have other nations that are not satisfied with what God gave them and want to find benefit from other nations' resources.

"This is how conflicts happen between nations; that is why we always pray that each nation benefits from its resources," said President Mnangagwa.

Turning to the issue of political dialogue, the President reiterated his position that he was open to talking to anyone through the Political Actors Dialogue Forum (POLAD).

"We have our dialogue as political parties at this place and my arms are stretched to say every political party should come and we build our nation. We are all Zimbabweans, we might get assistance from other nations but we all remain Zimbabweans.

"So as churches, pray for there to be peace and harmony in the country," he said.

President Mnangagwa saluted the churches for organising the National Day of Prayer.

"I have been at this place since 1980 and I want to tell you that such a thing has not happened before," he said.

He added that the church was free to organise regular prayer meetings at State House whenever they needed.

There were also banners on display at the event promoting the Government's devolution policy.

The banners highlighted the various natural resources found in each of the country's 10 provinces that could be exploited for the benefit of the respective communities.