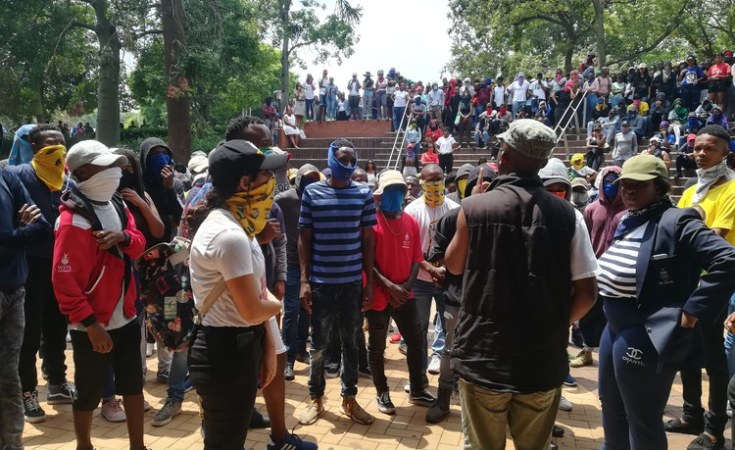 Zoe Postman/GroundUp
A group of about 200 students, led by the Wits Student Representative Council, protesting against an accommodation shortage and financial exclusions (file photo).
The Conversation Africa (Johannesburg)
analysis By Stella Sabi

The South African university student population has changed over the past 20 years to reflect wider society more closely than before. It's no surprise therefore that more students need support than before. The homes they come from are also struggling.

But what is perhaps surprising is that students who are receiving government financial support are still vulnerable to hunger. They are also reluctant to use the extra support that's available, and their health and studies suffer as a result.

Student vulnerability to hunger has emerged as an alarming problem at South African higher education institutions. The National Student Financial Aid Scheme covers school fees, accommodation and a stipend, but is leaving a big gap: food.

At the University of KwaZulu-Natal, where nearly half the students are from poor households, meal vouchers and food hampers have been offered since 2012.

Research by my colleagues and I reviewed whether this is making a difference. We found that more than half of the students in the study sometimes went hungry and that less than 10% of food insecure students, or those from poor households, had taken advantage of the program. This is largely due to lack of program awareness, and negative perceptions associated with food handouts.

More students need to know about the program, and more needs to be done to keep students who are beneficiaries anonymous so that they don't feel ashamed to access it. In addition to this, the government should offer financial support to campus food security interventions.

For the study, we asked 500 university students to participate using a questionnaire that included questions such as "how many meals do you eat on a normal day?" and "in the last 30 days, did you eat smaller meals due to a lack of resources?"

The study also examined what the students reported about their eating habits "in normal circumstances".

We found that a vulnerability to food insecurity was evident in over half (51.3%) of the students. These students sacrificed a meal due to a lack of resources.

About 10% of them were highly vulnerable to food insecurity. Because they couldn't afford it, these students either only ate one meal during the day, or would starve throughout the day and eat only at night.

Food insecurity has a huge impact on health, well-being and academic performance. Nearly 65% of the students indicated that hunger affected their energy levels and ability to think. About 30% of them were unable to attend class as a result.

Being food insecure was linked to students' source of funding and lack of resources. More specifically, the most food insecure students were sponsored by the National Student Financial Aid Scheme and come from impoverished families.

A big challenge we found is the negative perceptions students have about poverty and food insecurity. This stigma led to negative attitudes about food aid: 43% of the students found it embarrassing to be food insecure.

Food insecurity was perceived as a "shameful secret" among students and being a dependant on food handouts was closely associated with being "very poor". As a result nearly 40% of food insecure students showed reluctance to use or recommend the much-needed university food security interventions.

Previous studies in the US and South Africa have reported similar trends of "food handout shyness" among food insecure students.

Apart from having serious negative effects on their health, food insecurity has a negative impact on the socio-psychological state of the student and can lower their self-esteem. This will affect their academic performance.

Due to the negative perceptions associated with food aid among university students, and the lack of programme awareness, there needs to be more information available to stakeholders on interventions. The interventions will also be more sustainable if a well-established monitoring and evaluation system is in place.

To make food security sustainable, I also suggest gardening interventions. For example, in the US, the establishment of a free community market helped to address the problem of food insecurity and stigma associated with taking advantage of opportunities for free food.