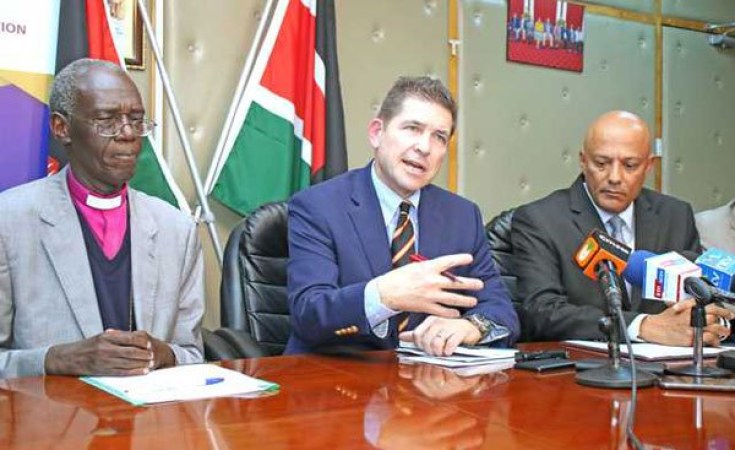 Individuals implicated in corruption and drugs and their family members will not be allowed to step on American soil as President Donald Trump's administration gets tough on Kenya.

Apart from imposing visa bans on Kenyans linked to corruption and drugs, the US has also put on hold construction of the Mombasa superhighway until the country sorts out its debt mess.

In an exclusive interview with the Nation, US Ambassador to Kenya Kyle McCarter said his country would act tough to help Kenya fight corruption and the drug menace.

The envoy warned those implicated in the Akasha brothers' drugs network that their days, too, were numbered.

But when, not if, the US will airlift those implicated in blocking the extradition of the Akasha brothers -- Baktash and Ibrahim -- is not clear.

"My message to them is simple: 'Beware ... We'll look for you; we'll come for you," said Mr McCarter.

"If we have the ability to do it, we will do it." On the ongoing war against corruption, Mr McCarter said the US administration has already stopped a senior personality -- whom he did not name -- from travelling to the US.

"This thievery has to stop. We shall not support anybody stealing money in Kenya to pay school fees in the US for their kids," he said.

This is the second time the US is invoking Proclamation 7750 on corrupt Kenyans.

In 2009, during the Anglo Leasing crisis, the US embassy invoked Proclamation 7750, which cancels or denies visas to anyone engaging in, associated with, or benefiting from corruption.

The envoy has been outspoken, of late, on Twitter with his hash tag #StopTheseThieves. "We've to prosecute influential people to be an example to everyone. Though Kenya is making progress in netting the 'big fish' -- it is not as fast (as we want)," the envoy told Nation, adding that his country had started training prosecutors and investigators.

"President [Uhuru] Kenyatta has our full support and we're going to be very active in helping institutions to combat corruption," he said.

Four months ago, the US Department of Justice and the Federal Bureau of Investigations (FBI) hosted the Director of Criminal Investigations George Kinoti alongside Director of Public Prosecutions Noordin Haji as part of the renewed efforts to streamline Kenya's criminal justice system. They also formed a Joint Terrorism Task Force in Kenya.

During the June 12 meeting, the two met with David Bowdich, the deputy director of the FBI, who oversees all FBI domestic and international investigative and intelligence activities. He, too, promised the two "full support".

On the proposed Sh300 billion Mombasa-Nairobi Expressway that the US was to finance, Mr McCarter said it will have to wait since "Kenya has hit a debt ceiling... the onus is on Kenya to put its debt in order."

He said: "We don't want to put debt on Kenyans. We want to do business in a transparent and ethical way."

Kenya's total public debt is currently around $60 billion (Sh6 trillion), or 63 per cent of the GDP.

In other words, the country owes more than half the value of its economic output, which is in breach of the statutory 50 per cent debt-to-GDP ratio in present value terms.

However, the envoy said the US was is determined to finance the project. "This will be a signature project. The cost will be lower and it will be a good road -- even for security purposes."

Excerpts from the interview:

Q: At the August 27, 2018 meeting at the White House, President Trump and President Kenyatta elevated the US-Kenya relationship to a strategic partnership.

A: This is one of only four in Africa. The others are Nigeria, South Africa, and Angola. This is a recognition of the pivotal role Kenya can and is playing not just within Africa, but globally. With this partnership, we're now holding annual bilateral strategic dialogues with senior government officials to discuss economic prosperity, defence cooperation, governance and civilian security, multilateral and health co-operation.

Q: But what became of the US-funded Sh300 billion Nairobi-Mombasa expressway?

A: The US government fully supports the efforts to build this signature project.

Bechtel [the company that was given the contract] and the US government have remained fully engaged with the government of Kenya and we continue to follow up on President Trump's and President Kenyatta's commitment to make the project a reality.

But Kenya's debt is spiralling out of control. We don't want to put debt on Kenyans.

We want to do business in a transparent and ethical way and the onus is on Kenya to put its debt in order.

Q: Last month you called for the arrest of 'big fish" in the war against corruption. Why did you tweet that?

A: Economic prosperity for all Kenyans is not possible without defeating the scourge of corruption.

By the government's own estimates, the annual cost of corruption could cover 100 per cent of the cost of the Big Four. This thievery has to stop.

We will keep (corrupt) people away from US. There are people who will not get US visas or send money to pay school fees for their children in the US.

We have started blocking such people. Why should we support somebody stealing money? More so, we are not going to tolerate impunity.

The choice has to be made. We have to be bold and hold people accountable.

Q: Your predecessor termed corruption as a "severe epidemic." What pointers do you get from the top leadership in Kenya, or is this just a cosmetic war?

A: We believe that President Kenyatta is firmly committed to combat corruption and the US government completely supports his efforts, particularly the need to deal effectively with high-level corruption.

We need to see people who are influential being prosecuted to be an example to everyone. We're making progress on getting the big fish, but not as fast.

Q: Kenya has been concerned that al-Shabaab is still a threat and has been urging the international community to hasten the listing of al-Shabaab as a terrorist organisation under the United Nations Security Council (UNSC) Resolution 1267 of 1999. What is the US position on this?

A: This is inaccurate and we have said as much. We formally designated al-Shabaab as a Foreign Terrorist Organisation over a decade ago in 2008.

But we have not done it under UN Resolution 1267 the way Kenya wants, which would require us to withdraw humanitarian aid to Somalia.

We believe it is not humane to withdraw humanitarian aid in Somalia. But the US has put its people to support [Amisom] bid to defeat al-Shabaab.

Q: On the marine border row between Kenya and Somalia, what position has the US taken and what diplomatic manoeuvres have been undertaken to help resolve the matter?

A: This has to be addressed quickly. We have been working to get President [Mohamed Abdullahi)] Farmajo and President Kenyatta to come to the discussion table.

I've been to Mogadishu to speak to the Somalia president. I told him to pull off the court case.

I've told them [Farmajo and Kenyatta] that the biggest hurdle is defeating al-Shabaab and that is the only way we can tap the gains on the blue economy.

President Kenyatta is doing all he can and we shall continue with our efforts to resolve the matter.

Q: On August 25, the US court jailed Kenyan drug lord Baktash Akasha for 25 years. The US administration must have been frustrated with the Kenyan judiciary on the extradition case. What message did the US want to send?

A: The message is to drug traffickers: You can get 25 years in prison for conspiring to import heroin and methamphetamine ... and obstructing justice by paying bribes to Kenyan officials in an effort to avoid extradition to the US.

Q: What will happen to their accomplices? Are you coming for them?

If we have the ability to do it, we will do it. But I cannot say much on this since it's an ongoing investigation.

Q: Exports of duty-free goods to the US under the African Growth and Opportunity Act (Agoa) grew by 25 per cent last year, the biggest leap in nine years, according the Kenya National Bureau of Statistics (KNBS). What changed?

A: There is a shift in the US economy and Kenyans should take advantage of that.

For instance, there is new demand for pyrethrum and all what Kenyans need is to go back to pyrethrum farming.

The market is there, the buyers are there. The US investors are already here looking for pyrethrum.

Q: You are on a whirlwind tour of the counties?

I intend to visit all the counties -- apart from one -- and this is because we're taking devolution very seriously.

We shall work together with counties that have shown that they can effectively use the money allocated.

We shall finance projects that bring development closer to the people.

We have, for instance, financed water projects in rural Laikipia and such projects address the safety of women and girls when they go out to look for water. I'm also concerned about efforts to empower the youth in the countryside.