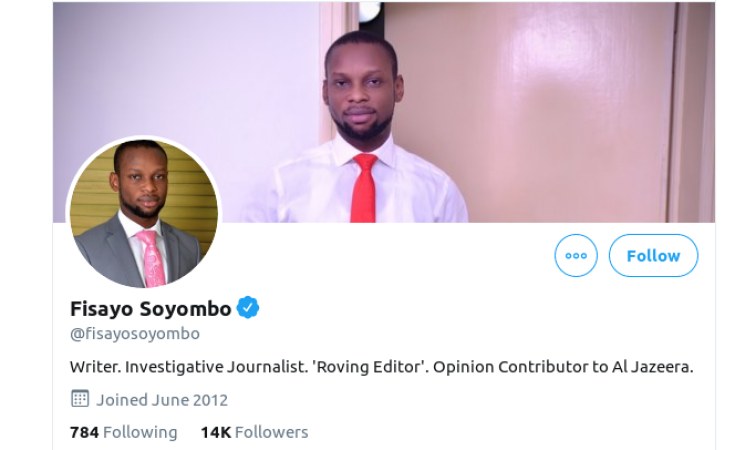 Nigerians on social media have reacted to the alleged plan to arrest Fisayo Soyombo, former editor of The ICIR, TheCable, and Sahara Reporters, over his undercover report exposing corruption in the Nigerian Police and Nigerian Correctional Service.

Unconfirmed reports had said the government planned to arrest and charge Mr Soyombo with espionage following the release of the second of his three-part investigative series.

Many Nigerian users of Twitter, however, called for his protection, saying no journalist should be prosecuted for doing his work.

Segun Awosanya, the convener of the End SARS campaign, said the Nigeria criminal justice system is already in a rot. He said prison authorities in Nigeria should carry out reforms that will reposition it instead of trying to clamp down on someone who has helped to further expose the rot.

"The Criminal Justice System is rotten. This is no news to Nigerians and the authorities themselves and the reaction to findings of investigative journalists as well as advocates of reforms must never be belligerent. The Nigeria Correctional Service must get this!" he tweeted.

"They (CG especially) should learn from previous advocacies and take dressing like @PoliceNG and @nigimmigration when @SIAF_NG exposed their running issues within. This is not the time to venture further into criminality by seeking to incriminate a whistleblower."

He warned that any attempt to arrest Mr Soyombo would pit the Nigerian Correctional Service against the entire nation and called on the Minister of Interior, Rauf Aregbesola, to call the Prisons authorities to order.

"Any attempt to incriminate, intimidate, harass, abduct or engage in any act of persecution of Fisayo Soyombo will pitch the Nigeria Correction Service against the entire Nation and we will all respond effectively and adequately. Nigeria belongs to all of us & you must comply," he wrote.

"The Nigeria Correction Service is a service to the people and must be guided in their response to feedback from the public. Exposing organized crime within the system must not be seen as an attack on anyone begging for reprisal but a path to healing.

"The 'Honorable' Minister of Interior @raufaregbesola should call the leadership of the Nigeria Correction Service ro order in this regard. The public perception of all uniformed officers in Nigeria is negative already and this must not be made worse," he further said.

In the same vein, Enough is Enough, a civil society organisation, faulted the alleged plan to arrest Mr Soyombo. It said his arrest would amount to intimidation of journalists to prevent them from doing their work. It observed that "courageous journalism is critical to democracy".

"The plan to arrest Fisayo Soyombo means intimidation. The role of a trained journalist is to get as close to the truth as is humanly possible," the NGO tweeted.

"Courageous journalism is critical to democracy. Journalists in Nigeria must be allowed to work freely for the public good."

Mayowa Tijani, an AFP fact-checking reporter, said Mr Soyombo's reward after his investigation should not be an arrest.

"I've known Fisayo Soyombo for more than a decade. And this is the life he chose: One of bravery, justice, and truth. @ProfOsinbajo, you've called on journalists to do investigations and fight fake news, 'Fisayo did just that. Should arrest be his reward?"

Mr Soyombo confirmed to Sahara Reporters on Tuesday that there were plans to arrest him and that he had gone into "hiding".

Living With a 'Mad' Cell Mate, Set Up By Prison Warders, Abducted By the Police

Nigerian Judge Changes Bail for #RevolutionNow Activist Sowore
Tagged:
Copyright © 2019 Premium Times. All rights reserved. Distributed by AllAfrica Global Media (allAfrica.com). To contact the copyright holder directly for corrections — or for permission to republish or make other authorized use of this material, click here.