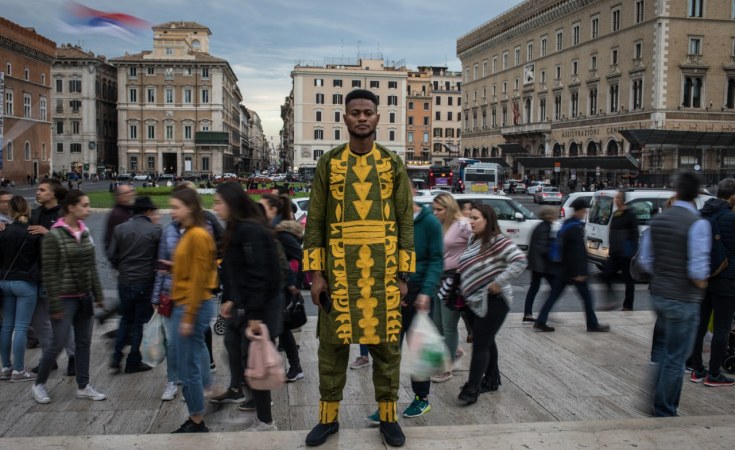 United Nations — Sub-Saharan African migrants who risk perilous sea crossings to Europe are often assumed to be illiterate, jobless chancers in desperate bids to flee stagnation and rampant corruption in their home countries. But a survey of some 2,000 irregular African migrants in Europe found them to be more educated than expected, while many of them were leaving behind jobs back home that paid better-than-average wages.

While economic factors do indeed drive many Africans to irregularly migrate across the Mediterranean Sea, a new United Nations report provides some startling data that could change the way migrants are perceived in Europe.

"The report finds that getting a job was not the only motivation to move and that not all irregular migrants were poor in Africa or had lower education levels," U.N. spokesman Stephane Dujarric told reporters on Monday.

"Over half of those interviewed were employed or in school at the time of their departure, with the majority of those working earning competitive wages."

The report, called Scaling Fences: Voices of Irregular African Migrants to Europe, also found that more than 90 percent of those surveyed were undeterred by risky sea crossings and other dangers and would brave such a journey again.

Researchers interviewed 1,970 migrants from 39 African countries who had traveled without official papers and lived in 13 European nations. They had migrated primarily for job prospects and were not seeking asylum.

#ScalingFencesUNDP: why does risking death travelling to another country hold more promise than staying? @ahunnaeziakonwa on how the #migration crisis is disrupting Africa's development progress and the need to understand the drivers. https://t.co/frd0eh0DWW pic.twitter.com/ay6ZjKaS1d -- UNDP Africa (@UNDPAfrica) 21 October 2019

They found that the undocumented migrants had often not been struggling by sub-Sahara African standards. Some 58 percent either had a job or were in school at the time they decided to take a risky journey north.

On average, the respondents had three more years of education under their belts than peers. For those who were leaving jobs in their African homelands, they tended to have commanded better-than-average wages.

Still, money was a big motivating factor to leave. About half of the respondents who left jobs said they had not been earning enough. Wages earned in Europe were typically much higher than those paid back home.

"The report is meant to paint a clearer picture of why irregular migrants move from Africa to Europe," added Dujarric.

"The report calls for more opportunities and choices in Africa while enhancing opportunities to move from ungoverned to governed migration."

According to researchers, jobs and money were not the only factors. Of those surveyed, 77 percent said they lacked a political voice back home, and 62 percent said they had been treated unfairly by their governments.

Achim Steiner, Administrator of the U.N. Development Programme, said the 71-page report showed how African migrants often left home because of "barriers to opportunity" and "choice-lessness" in graft-ridden economies.

"Migration is a reverberation of development progress across Africa, albeit progress that is uneven and not fast enough to meet people's aspirations," said Steiner.

The European Union has witnessed mounting migrant flows in recent years, with folks drowning at sea during perilous crossings in rickety boats and often getting stuck in sprawling, unsanitary camps in Greece and elsewhere.

This has raised political tensions across the 28-nation bloc, with Italy and others adopting anti-immigrant policies and members struggling to agree on how to process and host new arrivals.

The #EU requires bold leadership in telling a story about #migration as a normal and necessary phenomenon. Currently, it is undermining its own credibility and failing to take responsibility for the situation. 💡 New from @Shoshana_Fine @ECFRMenahttps://t.co/RhJZxViI00 -- ECFR (@ecfr) 15 October 2019

"As it stands, the bloc has no system through which member states can share responsibility for hosting migrants in a fair manner," Shoshana Fine, a fellow at the European Council on Foreign Relations think tank, said in a report this month.

"As a consequence, they continue to wrangle with one another over which of them should host the asylum seekers and other migrants who reach Europe's shores."

Will Global Compact Address Migration Challenges?
Tagged:
Copyright © 2019 Inter Press Service. All rights reserved. Distributed by AllAfrica Global Media (allAfrica.com). To contact the copyright holder directly for corrections — or for permission to republish or make other authorized use of this material, click here.